We woke early in our cell of the Convent having both slept really well. It was dark and gloomy outside, but then we were on the top of a hill. We returned to the cafe in Pizza Emanuale to make use of the free wifi and to have breakfast.

Today was going to be a wet one and before we left the sanctuary of a warm dry inside space, the heavens started to open and the rain just fell out of the sky. We slowly put our waterproof clothing on and bravely stepped outside. There was no point playing dodge the puddles as we travelled along the medieval street and through the ancient gateway. As we left the old town there was a brief respite in the weather.

Our journey took us past St Flaviano church, well worth a visit inside if you are every in the area. On the outskirts of the new part of the town we decided to make the days walk shorter by taking the route along what was described as a quite road. I think the gods were against as once again the heavens erupted as the rain fell out of the sky. As we stopped to let a car pass by at a junction, it stopped and the window came down and a very nice lady proceeded to ask if we need an umbrella and started to take hers off the back seat and started waving it as us. We politely declined saying Grazie mille, Grazie mille.....many thanks but no thank you. We all went on our way and as we trudged through the rain we both acknowledged what a wonderful gesture that was.

The road was not quiet and the rain did not stop. On the odd occasion we tried to seek sanctuary under trees to avoid the heaviest of the rain but it really was quite futile and so rather than stand and get cold we pressed on. After six kilometres we left the the road behind and the traffic and soon we were again travelling along the old Roman road of the Via Cassia.

From the Roman road we continued along descending through the woods. It was poorly marked and the guide book was not much use and with paths going in all directions but slowly we made our way. The book mentioned crossing a stream by a derelict house and as I pressed on Claire called me back pointing to markers I had missed on the left. I was sure that I was going in the right direction and mentioned that but decided that maybe I was wrong and decided to follow the directions Claire had found.

As mentioned in the book it took us across a stream but not one with a bridge. We gingerly crossed over using the stepping stones that had naturally fallen as a vague route and yes there was a ruined house but on the wrong side to what the book had described.

We ascended the bank and up the hillside to come across a very clear stone track with a Via Francigena sign pointing to our right. The route we had decided to take was obviously a short cut someone had created. I may point that out in my walk notes so that the readers can then make their own decision as to which route they take.

It was well after midday and we were both hungry. At a small chapel there was a picnic bench and we decided it was an ideal spot to have lunch. Whilst stood there acorns occasionally plopped out of the tree either onto our heads or the floor. As we laid out our meal of slightly hard Foccacia bread, cheese and tomotoes the sky once again decided to grace us with some wet stuff once again. We hurriedly packed everything away but not before my sandwich got a bit soggy. On the plus side it made it a bit easier to chew. Needless to say we skipped desert. 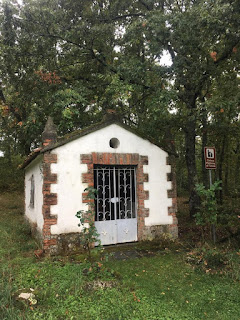 The afternoon saw us slowly wind our way up through the woods ascending one side of the hillside before we started to descend into Bolsena. As we rounded a corner the lake just unfolding like a carpet before us and below us. We both stopped to take some pictures and as the rain had stopped, remove some clothes. 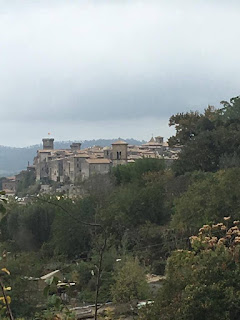 As we entered the town we looked like two tired travelling tinkers, with our clothes hanging from our rucksacks but we didn't mind. We had made it and we were mostly dry except from the perspiration from the 80% humidity.
abbeywalks.co.uk

Posted by Happea Travellers at 06:19