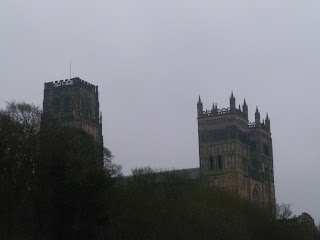 Durham cathedral. The room was cozy, with everything I needed and was surprisingly quiet. I woke up an hour before breakfast to complete the morning's routine and have my bag packed ready for an 8.30am start.

Breakfast was part of my accommodation deal and just before 8am I was queueing with resident students waiting for the door to open. At 8 am prompt the doors opened and like a lemming I followed the duties of everyone else. For me it was a bit like being back queueing for school dinners. At the hot food section, I apologised for being a vegetarian and was offered a very well cooked hash brown and one braised tomato. I hovered slightly and was then told that the eggs were on their way……..Now I think that at this point the Trade Descriptions Inspectors should have stepped in! Eggs, Eggs, a steaming baking dish of pale yellow, very flat looking congealed thing was put in the place of the eggs. I guess this was what they loosely described as scrambled egg, although it bore no resemblance. My thoughts must have been read because as soon as the pale congealed slop was put in place then the surface was liberally stroked and chopped up with a large serving spoon. Well I guess that made some difference.  I bravely offered my plate up and yes you guessed it….there was no flavour at all.

After my breakfast experience I was on my way by 8.30am. My route took me through urban Durham to pick up Cycle Route 14 and up one killer hill that woke me up very quickly.

On the outskirts of Durham I picked up Cycle Route 14 and the Lanchester Way another railway line that I followed through ……. by the time I reached Lanchester I had completed 20km and was ready for a coffee. A signpost directed me to the local shops and I headed in that direction. I came across just what I was looking for. I stepped gingerly inside as I was a soggy mess due to the incessant rain outside. I was welcomed in and was informed that the cafe was an Austrian / German coffee house. I took advantage of a strong black coffee and some Apfel Kuchen…..and then another coffee. 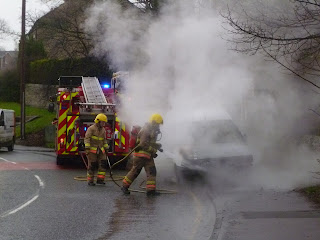 Once my energy levels had been raised I stepped outside to see a small van on fire and being dealt with by firemen wearing breathing apparatus. This was right by the path I was supposed to be taking, so like an excited school boy I waited patiently for the fire to be dealt with until I was allowed to pass the site and be on my way.

I continued along the railway to the outskirts of Consett and past the site of the steel works that used to employ the majority of the Consett population in the 1970’s before it was closed.

I had arranged to meet Rachel at a Consett pub so that we could spend the weekend at her parents,  only 30 minutes away by car. The pub we had arranged to meet at was closed, so I went on an impromptu pub crawl and ended up at the Scotch Arms in Blackhills. I checked with the barmaid that they were going to remain open all day ( as Rachel would be a few hours yet ) and once confirmed took advantage of a chip butty and a pint of Haggis Hunter…….delicious.

After a two hour wait Rachel arrived, and I was whisked away at speed, within the legal limit, to a hot bath and a curry.

Posted by Happea Travellers at 12:42