Breakfast was not until 8am despite me being the only guest at this accommodation. The shooting party who were also staying at the pub would no doubt have brekkie later after bagging a few birds, Phaw Phaw! 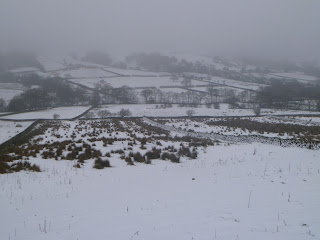 With a full stomach and some trepidation I set off into the cold morning air, hopefully I was not going to die today ! I had decided to take the advice of the landlady, and not wishing to repeat part of the previous day's walk, I followed a minor road to the head of the Farndale valley. The going was quiet tough, there had been a fresh sprinkling of snow, so once again I was doing a good impersonation of Torvill and Dean but with no Bolero playing in the background. Eventually, and with a certain pride, I reached the end of the road. I had two choices now, either right across virgin snow or straight ahead on the permissive track.

Right would take me across virgin snow, how deep was it ? Across a stream, how steep were the sides, how deep would it be if I fell in and would I reach the track in the distance that I could see before I died ?

Straight ahead, my options were deep snow but motorbikes had used this so I could follow them. The ground looked very boggy, would I sink with the weight on my back? And would I die that way too ?

With almost certain death either way, I chose to follow the permissive path over an exceptional boggy, smelly, deep squelchy and snowy field, and across a stream using very slippery stones………….I survived!! 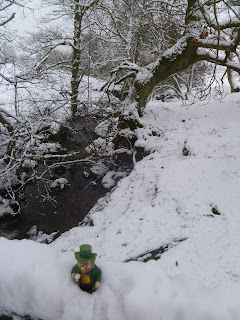 With jubilation I turned left over the stream and onto the track that I would follow to get me to the moors track of Rudland Rigg. I was quite happy now - walking and slipping backwards, sidewards and forwards along the virgin snow and then I crossed over a wooden bridge. ‘Wee man’ was keen to see the sights and took the opportunity of a snowy photo shoot on the bridge. Once completed we were on our way………….and then the fun started !

I knew where I wanted to go in the field, I knew how to get there, but there was no sign of any path or footsteps or motorbike tyre tracks, or anything. Just marshy weedy ears poking out of the clean snow, beckoning me to walk across, ready to suck me under the snow in the quagmirey, soupy, smelly water.

Like Rudolph Nureyev I balletted across the tufts of marsh grass to avoid being sucked under and before long I reached the first gate, slightly out of breath but unscarred.

I looked into the next field and surveyed what was in store…..more of the same, up hill, steep, very steep and a gate. Could I get across this one unscathed………….No chance! I set off with renewed confidence, taking it slow and steadily. The snow got deeper, and more slippery. Soon I was on my knees, body still moving forward with inertia ( I didn’t know she was with me! ) I picked myself up, I progressed a few steps, I fell……she was back again, inertia kept me going forwards until I was on my hands and knees. Well this style of walking, nose diving, and lot’s of inertia carried on, until out of breath, I arrived at the gate. I celebrated with a whoopee and several mouthfuls of cold water.

Once I had caught my breath. I checked my position and decided that with no sight of a path or track that the best course of action was to get a fixed position / direction and walk. …….How wrong I was. Within minutes of setting off I put my right foot down and it just kept going, and going and going, only to stop in a very deep smelly boggy hole. I was up to my meat and two veg in snow, it was cold, it was wet and I was very stuck. I tried to move but I could not get enough momentum to get out. I pulled on my foot as hard as I could and suddenly I was free and almost on my back. It reminded me of the farmer and the giant turnip, except there were no turnips here and there were no animals helping me out.

Subconsciously I was very proud of myself, because at no time did I ever shout out………I’M GOING TO DIE or HELPPPPPPP! I managed to stay calm throughout the whole process. Maybe my brain was just frozen!

Finally I found a grouse butt almost buried in the snow and that told me I was close to the track. I went in search and sure enough the track or the sign of a track appeared. I waded my way along using the pole poking method and soon I was at the Rudland Rigg. I turned right knowing that civilisation was now not too far away. I just had to put my head down and march because getting to this point had taken an age and I still had 20km ahead of me.

The weather on top of the moors was bleak, no view, just mist. I put my head down and walked until I reached a point where the path forked. I turned right to keep on the Cleveland Way and by now, with a clear view ahead of me, I could see that I was once more in trouble.

The section of path had only been walked on once, probably by a women, with size 1 boots and going in the opposite direction, so I could not walk in those footsteps. Also the snow was furled in waves of deep, very high cliffs of snow. This time it was two steps forward, step with the foot to the highest point…………think about inertia very very hard……..and with great effort move other foot up…..and squeeze buttocks! Would the snow hold my weight, would I sink………….no it held, and so on and so on. But every now and then, after releasing clenched buttocks, thinking the snow was ok…..I sank. There really was no pattern to it, but I am sure it would have looked hilarious had it been filmed……It might have even won an Oscar. 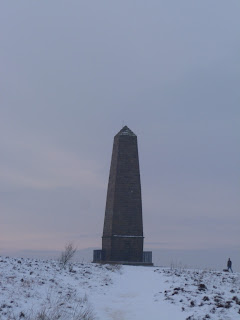 By now my energy levels were fairly sapped but I only had two miles to get to Kildale and it was downhill. How hard could that be? Well the answer was very. I was by now walking on a tarmaced track which was very slippery in places. I shimmied from left to right across the road looking for safe passage, occasionally onto the grass verge or gulley, finally to the main road and a flat surface.

would arrive at my hotel, I was going to rest. Toasted fruit loaf and a hot chocolate minus marshmallows and cream later, I was ready to go for it. My route continued uphill…..aggghhh. But once at the top I crossed over to the Captain Cook’s monument, basically a concrete / brick pointy needle up to the sky. There was a decent view however, but no time to dilly dally, time was pressing. From the monument it was downhill and again I adopted a new technique. I have learnt alot in these two days of walking. My gait this time had significantly increased in speed, due to that women…..inertia, a slight air of cockiness and a definitive shimmy from side to side to reach solid snow….a bit like a downhill skier but without skies. 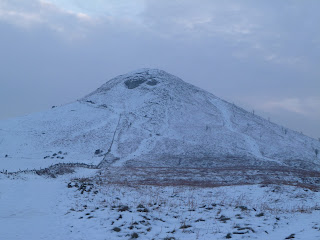 Soon I was at the carpark…..I was nearly there, I could feel it in the air. I turned right, there was the sign, two miles….whoppee. I nearly danced but there were people in the carpark. I turned left. STEPS, lots of them, STEPS going UPHILL, who put those there? It was so unfair, I felt a Kevin moment coming on, but I kept myself in check, I am a professional walker. With one step forward at a time, and with some inertia I climbed the Everest of steps to reach the almost flattish moor.

The sheep looked at me in pity, they new and could see I was tired. I could see them willing me onwards. Roseberry Topping came into view and I knew then that I had made it…..I had survived one of the hardest days walk I have had for some time and I hadn’t died !

Posted by Happea Travellers at 08:00