We had arrived in Viterbo the previous day and then spent nearly 2 hours deciding on accommodation. We were wet and tired and the thoughts of staying in the Covent with other Pilgrims in one room and nowhere to dry clothes put us off staying there.

I tried unsuccessfully to plead a bargain deal with the Zodiac hotel, somewhere I'd stayed previously, but I was unsuccessful. We did find somewhere else that offered rooms for €15, a good price, but when we asked for directions found that it was 2km further on to walk.

I'd past by a B & B next door to the convent, so with a script prepared, I called and was greeted by a very excited Italian Senora. Between both us I secured a good price that included breakfast and explained we'd be there in 5 minutes. Upon arrival the Senora was still excited and talked at hundred miles an hour and left me quite exhausted listening to her. We were shown to our room, a bit like Fawlty Towers, lovely green decor, some very inexpensive pictures probably from a car boot or from a grandparent left in a will! But on a positive note and something that was expressed throughout our stay..............it had a lovely balcony overlooking the Santa Cristi Piazze and the church. 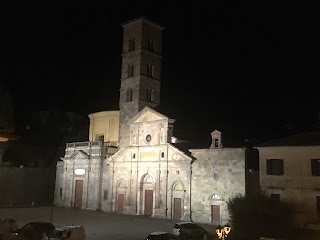 Our breakfast was exceptionally brown, but Claire did manage to have a Latte prepared by me, in what could only be described as a soup bowl because only the English do mugs. Needless to say we soon left the place and made our way through the medieval town.

The route took us up a long flight of manageable steps to the castle at the top and there we were blessed with via Francigena signs everywhere, going in all directions and bearing no resemblance to my guide book. After some comings and goings and much scratching of heads we finally identified the way forward.

The day was going to be of two halves with an afternoon lunch stop at San Lorenzo Nuovo and today we were blessed with cloudless skies and an anticipated temperature around 24 degrees.

We took our time leaving the edge of the town, taking every opportunity of taking photographs back across to the castle and the lake below with a backdrop of a cloudless blue sky. Initially the journey was a slow steady climb past the Roman town of Volsnii near the site of the Etruscan settlement of Veltna, conquered by the Romans in 265 BC.

Within thirty minutes we were once again walking between olive groves interspersed with views to our left of the lake unfolding between its branches. Parts of the route were being cleared by a couple of the local people, we chatted away in our own languages and in-between laughing I offered to swap my pack to do some of the work. 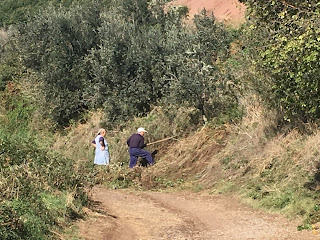 It was easy going as we both settled into our walk routine of scouring the way ahead for the Via Francigena signs peppered in all manner of places, some easy to locate others just wrapped around the odd twig of a tree.

The final part of the journey to San Lorenzo was not that pleasant as it involved 3km of the very busy and windy Via Cassia road. There has been an ongoing dispute with a land owner over the rights of way of a track that runs through his land. Obviously his quite happy for walkers to be either run over or killed on the road.

In San Lorenzo Nuovo we met a Canadian family who had spent five months travelling, what a fabulous experience for the children. Mum and dad were carrying enough for all of them, their walk taking them from Siena to Rome - two weeks on the road with no electronic gizmos or gadget.

In the town we made our way to the cafe in the Piazza, ordered two beers and paninis for lunch and sat in the sun and just talked about nothing and something. As we sat we were reminded of the influx of immigrants in Italy as there was a small group in the square totally engrossed in their mobile phones.

After settling the bill we were back on the road, the way ahead I remembered as not that interesting as we would slowly wind our way around the fields to Aquapendente. How wrong I would be!

Part way through our journey along the fields Claire stopped to remove some articles of clothing......she's getting good at that as we walk together. Once dressed more comfortably we pressed on. About a kilometre further on Claire suddenly stopped...."my walking pole, where's my walking pole"? She exclaimed. "O know, I've left it back where we stopped"

Like a true gentleman I am, I quickly threw off my pack and ran all the way back there to retrieve the walking pole. Claire obviously thought this was a truly heroic deed as unbeknown to me she felt it was an appropriate opportunity to record my marathon sprint. I have to say having seen the video, I was quite good and my running style is very professional!

Once stick was retrieved we progressed through the fields and by late afternoon we had arrived at the hotel Il Borgo that was going to be our home for two nights.

Posted by Happea Travellers at 06:22