Stage 6. The Sisters of Divine Love!

Viterbo is truly a wonderful place for a Pilgrim rest day. Our apartment had everything we needed, a washing machine, his and hers sinks, a kitchen with an oven that tripped the electricity and a gas hob that needed turning off on the main tap because it leaked! Despite those few quirks, it was very comfy and very central.

Our rested day had consisted of walking through and around the walls of the old town, winding our way through the streets following the direction of the walls. Three quarters of the way round I came across where I had stayed before at a Franciscan Monastery, my accommodation being in one of the old towers that line the walls. Claire and I ventured inside, wandered around the Cloister graced with frescos on all four sides and poked our noses in all the doors we could find open, unfortunately the church was not one of those.

We continued on our way and shortly after midday we went back to where we had eaten the night before - L'Accheta. We sat outside and had a two hour lunch, drinking wine and dining on a platter of battered fresh vegetables, cheese, bread, salad, olive oil and balsamic vinegar. Before we sat down the place was empty with only an hour before closing. After we sat down the place suddenly became a hive of eaters commandeering all the tables inside and out. I suggested that I should ask for commission for bringing everyone in, but my Italian does not stretch to that manner of conversation.

We slowly made our way back to the apartment and I checked how far we had walked - 10.6km, not bad for a rest day. 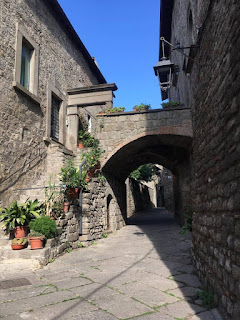 We woke early and were leaving the apartment in haste, both excited at the thought of spending some time in the Thermal pools along the way. Initially the journey saw us making our way along one of the main roads out of Viterbo and then past the cemetary. Viterbo must have a lot of residents or maybe just a lot of people die there because the cemetary has been extended and there is now a large, very modern, several storeys highs gothic monstrosity at the side of the old one. It has to be seen to be believed.

After 7km we came across the pool and as we had been told by other Pilgrims it was very busy with the car park almost bumper to bumper with Recreational Vehicles or Camper vans as I would call them. We paid our Pilgrim fee of €5 and received a stamp for our pilgrim passport and then we were in. We had both come prepared and soon we had just whipped our clothes off - Claire down to shorts and short top and me down to my Budgie smuggler type pants!

I have never been in a thermal pool and although it smelt like rotten eggs, once in the water it was lovely and warm and very soft. There were five pools or Bangos (Banyos) virtually full with bathers of all shapes, sizes and ages and I was immediately struck with the thought of wallowing hippos. But that would have been cruel to the hippos! Claire made me go in the plunge pool which was ice cold and I'm sure I had something before I went in but couldn't find it afterwards! An hour late and with a decent days walk ahead we got dressed and continued on our way.

We had missed Pelligrini time, 11.30am, but after only 2km we stumbled across a couple sat at the side of the path in the shade resting from the heat. We bid them Buon Camino and continued on only to pass another six more within the next 4km.

With 6km to the end of the walk we reached the best part of the day and something I was excited for Claire to experience. We passed under a railway line for the second time and then turned right to walk parallel with it. The track soon changed from Earth to large black cobbled stones of all sizes, carefully fitted together to form a path. I asked Claire if she knew what this was and she replied...."a Roman Road"?

Yes but not just any Roman road, this was the Via Cassia AD500 and it most places it looked like it had just been built. Our pace slowed, not only because of what we were walking on but also because by now the path had started the long ascent into Montefiascone. 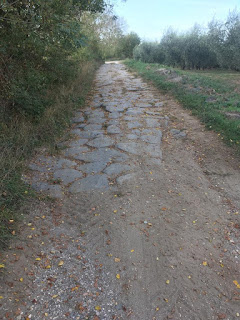 Our path along the Via Cassia passed through olive groves, hazelnut trees and kiwi fruit groves, with the fruit of the kiwi looking very unpleasant, see the picture to draw your own thoughts.

The final few kilometres involved a 1600 foot climb up to Montefiascone, but it was well worth it once there. Before we walked through the old gate we made our way to the view point and looked out over Lake Bolsena, the largest volcanic lake in the world. It was once a chain of volcanos that over successive eruptions all collapsed in a on themselves and left the crater which over time filled up. There have been two further eruptions from Volcanos beneath the water and these have created two islands in the lake. 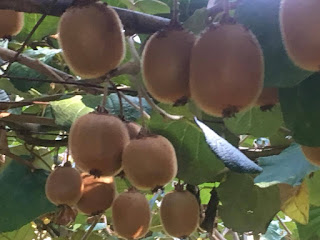 We walked through the door and at another view point we stopped for photos with the two iron pilgrim sculptures and the made our way to the Piazza Emanuele and the end of the stage.

Once the route had been saved on my GPS we made our way to the Instuto Divini Amore (The Sisters of Divine Love). No not some hippy 60's love institute but a convent. I rang the bell and explained who were and soon we were ushered in by a lovely bubbly Sister who looked about seventy and was only about four foot tall. After our passports and Pilgrim passports were handed over we were shown our cell for the night. Two comfy single beds and showers either end of the corridor. The Sister explained that we would receive an evening meal and she would come and knock on our door at 7.30pm and take us to dinner.

At just after 7.30 we were taken to the dining room and a feast was spread before us, fresh fruit, fresh cheese and bread, water and a bottle of Est Est Est rosso the local wine. I had mentioned that I was a vegetarian and for our first course we had fresh pasta in black pepper and then had a platter of fried eggs on salad leaves brought. It seemed a real mixture of food but it was heaven. We took our time with our meal and once completed our Sister arrived with our passports and we handed over the princely some of €20 each, all that was asked for our bed and evening meal.

The generosity and kind we received was very moving and we had many laughs over trying to talk to each other, not really understanding the true gist of what was being said.

It's probably not a common thing and maybe you could call it a tip but from the change I received I handed it back saying Donativo......a donation.

Posted by Happea Travellers at 04:26