With less than ten miles to walk today I had planned on a relaxing natural wake up, breakfast al- fresco in the sun and a peaceful gentle stroll to Citeaux Abbey where I arrived last year at the end of my long walk. Well two of those came to fruition.

I had presence of mind to check the train timetables before I went to sleep, always a good idea if you’ve never travelled from a particular station before. It transpired that there were plenty of very early or very late trains but nothing that really suited my idea of a relaxing wake up. Never mind it’s not supposed to be a holiday so I plumbed for the 8.25am train and 6.45am alarm call. Now I have become adept at the order of packing my rucsac quickly and everything has its own order in there. So I was soon on my way and chose to walk to the station rather than getting the tram.

Having been in Dijon before I knew a rather good Boulangerie so I made a bee line for it and with my very first attempt so far at French I hastened a quick and friendly Bonjour to the madam behind the counter. Bonjour she replied. I then promptly pointed at a Baguette momentarily forgetting the french word for baguette……..der! Is it not Baguette? I did manage a twa fromage, well it was written for me so that was not difficult and a tarte thon sil vous plais. Voila, I think I have got this French thing cracked. Au revoir I bid as i left, she replied Bon Journey……I just love the politeness of the French people and they can be, we Brits just don’t always seem to come across them.

I pootled off to the station to try the local lingo again now feeling full of confidence. Rachel had kindly written a few phrases I might need, so armed with that I went to the ticket office and asked ….for un billet simple a Vougeat sil vois plais, and immediately was told …..sorry it’s that counter over there you need! Now how did he guess I was English?

I tried again and was very surprised that I even managed to pronounce the station where I wanted to get off, correctly. Well I guess the old adage is practice makes perfect and I am sure I will get the hang of the language…..one day.

The train arrived and I found my place. Most of the passengers were going to work and amongst the chatter my ears pricked up and I thought I know that accent …..yep it’s Welsh. A student from across the pond from here was expressing frustration at being caught between a political in fight between two managers in his work placement. Surprisingly the student does not speak French. I bid him good morning as he got off the train…..Yorkshire he shouted back at me…..yes I replied proudly. Now you can take a man out of Yorkshire but you can’t take the Yorkshire out of a Yorkshire man!

The walk to Citeaux was so familiar, no need for any map or GPS checking. I soon left the road and into the woods to follow the path as it meandered through. As I broke cover, the sun is shining and the sky is blue and the air is deafening with silence…..it really is heaven. I took advantage of some naturally placed seats to have a breather, well a pile of logs that were situated to give a seat and a back rest, very comfy. I stayed there for a while just soaking in the view, watching a couple of Buzzards circling and riding the thermals. 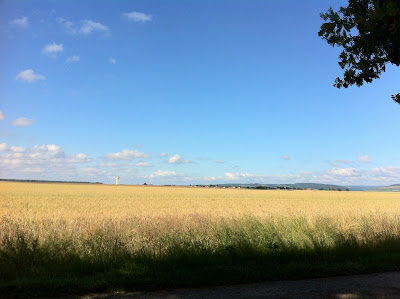 After a brief respite I was soon on my way and in no time at all I arrived a Citeaux Abbey. I checked in the shop to see if Fr Bourdiet was working but he was not so it was back outside for an early lunch, a few more pages of my book, all in the sun again. After lunch I popped into the church for the Sexpt service (midday). Now I don’t know about you, but the sound of Monks praying and chanting really does give me goose bumps in the nicest sense. Whatever ails me, as soon as I hear that sound all the burdens in the world just seem to fall off my shoulders. 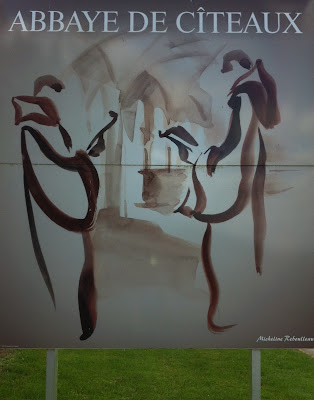 With the spiritual cleansing completed I set off to my second home for the night, the abbey grange. The grange is part of the original abbey, 12th century. The sleeping area in effect was the cow shed complete with channels in the floor. It sounds exceptionally awful but surprisingly it is very comfortable and well equipped for Pilgrims, as it is on the Compostela route too. Inside there are camp beds, hot shower, cooking facilities, provisions including beer and wine, all relying on the honesty of the guests that use it. Home from home…

Posted by Happea Travellers at 09:29