Not a day I want to remember


Everything started off well with a pleasant breakfast and loads of strong coffee to get the brain cells buzzing. There was a retired couple who had obviously stayed the night dining to and they kept looking at me and then talking between themselves. Eventually she smiled and asked me if I was a Pelerin (A Pilgrim) ……Compostella La Puy en Valey? she also uttered. Now La Puy en Valey is one of the starting points for the Santiago De Compostela routes. I replied that yes I was but my walk had started from the North of England. Well a rather interesting French / English / pointing discussion then ensued. They were both very excited at what I had accomplished and where I was planning to finish my journey …..Rome.

The excited conversation continued at a pace between themselves and the hotel landlord who also seemed rather amazed. To my shock / horror and great amusement they even asked for a photo of me with my rucsac on…….well how could I refuse. With my pack on my back and tummy sucked in I posed like a cat walk model with a big cheesy grin on my face.

I left the hotel with a spring in my step. Auxonne is a medieval town with many remaining features including the church with a slightly twisted spire. With supplies for the days walk and plenty of water I left the town to continue on the long day ahead. 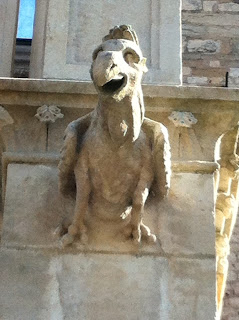 Walking in France is not always an easy thing to do, most of the paths are along minor roads or tracks through woods or fields. Even if it is a marked path it does not always mean you will be able to use it as farmers very often just close them and don’t provide a detour. I had planned todays walk using a map of the area and with modern technology, Google maps to get a satellite view of the route. This second view had shown a route through the woods to avoid the minor road, this being my preferred choice as the tarmac’d roads are always hard to walk…..no pun intended.

I turned off the road having reached the point to go into the woods and made sure there were no Privee notices to stop me. As I got into the woods it soon became clear that I was probably not going to find the track on my right due to the forest debris and overgrown ground. I checked with my GPS, a marvellous invention, to double check the location of the track I was looking for and there was no sign of it on the ground so I retraced my route back to the road. Sacré bleu

After several kilometres further on I saw an old man walking across the road towards his car with a chainsaw in hand. Now that is not a sight you see every day, hopefully he had not dragged is wife into the woods and cut up her body! I nervously passed him keeping my distance and he bid me bonjour and promptly uttered blah blah blah whilst waving his arms frantically in the air like a windmill possessed. I think his was telling me that there were lots of flies and other nasty bitey, stingy things around so be careful. I thought that was rather sweet of him to tell me that, even though I was only guessing what he was saying. I nodded my head politely, thanked him and bid him bonjour too whilst noting there was no dead body in the boot of his car or signs of blood dripping off the blade of the chainsaw.

I soon came to the village of Plieney and decided to seek shelter in the shade of the Lavoire (the village wash house). Now this turned out to be the wrong thing to do because after I had put my rucsac back on and set of walking again I soon became aware that everything was not well with my feet. I hobbled off like an old man wobbling from side to side to avoid the discomfort that was now radiating from my feet. Eventually either my feet got used to the walking again or they had been removed from my body as  the discomfort soon got less and less or so I thought. 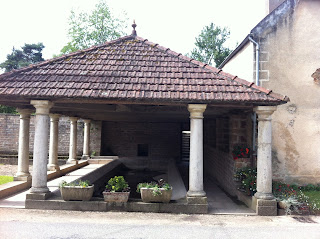 I had decided again to take a detour off the road at the next village, as again I had found a forest track to use. As I strolled down the hill the discomfort in my feet came back to remind me that they were really not happy bunnies. Once again I chose to ignore them and like a brave wounded soldier I battled on through the woods. The route I had chosen turned out to be ok this time and in fact was actually part of a Compostela route which up until then I was unaware of.

By now it was well past midday and I took shelter under a tree in a field and had my lunch which I had successfully purchased back in Auxonne. My French is now progressing rather well even if I do say so myself. Food consumed and thirst quenched I set off, or that was my plan, my feet now were definitely not happy bunnies. I battled through the pain and once again got back into the stride to the next village. No pain no gain!

As I entered the village my right foot suddenly did something really weird. It felt like a small balloon going off and then a cold dampness followed. O dear me I uttered, or words to that effect and then went into survival mode. Right lets get to the next house, made it, now the next car, made it and so on with the final goal being the church in the distance where I would decamp and render first aid to my foot.

Mission accomplished and I will spare you the gory details but once again I had succumbed to blisters on the pad of my right foot, the second time in three weeks. The balloon popping and the cold wetness, well I will let you use your imagination. I rendered first aid to my battle worn foot, put my boot on and with some more food and water on board I waddled off like a duck again toward my final goal…the Abbaye d’Acey now only 4 kilometres away…….or so I thought!

For a minor single track road there was a lot of traffic which I had to keep dodging and diving off to avoid be squashed like a bug on a windscreen. Suddenly a pain shot through the side off my left heel. O dear me I uttered again, or words to that effect - well this blog could be being read by small children! I stopped immediately and once again render first aid. Yep you guessed another blister, now some would say that it is not a good idea to pop them but it is far more painful to walk on them without doing so. So again with the first aid complete I once again waddled off. My speed by now greatly reduced and the goal being to just get there no matter how long it took. Even if it took days!

I finally arrived at my destination and announced my arrival to the Monk sat on the reception desk. After five minutes of silence the Hotelier arrived, another Monk but this time dressed in his work overalls. Not much really was said and he did not seem interested in me at all. He asked if I had something to eat, I replied no, “so you want a meal” he replied. By now I was definitely feeling that I was not welcome. He told me he could bring some bread and cheese later on which I would had been very grateful for.

After being shown to my room I thought a nice hot shower would do the trick, wash all the troubles, trials and tribulations away and everything would be rosy afterwards. Wrong! As I was the only guest in the accommodation the hot water had not been turned on, so with a brave smile and hoping nothing too much would disappear I braved and icy cold shower.

Once dried and with clean clothes I visited the church. Now the Abbaye d’Acey is one of the most well known Cistercian Abbey’s in the area. It has been on the site since the 12th Century with the church being one of the main survivors from that time. It really is a beautiful if not sparse building. I attended the Vespers evening prayer with fifteen Cistercian Nuns and eighteen Cistercian Monks. It really was a spiritually enlightening experience. 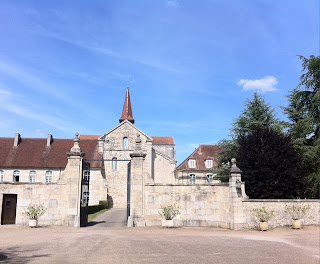 I had been pre-warned by my host Monk that he would bring a basket of food after Vespers. Eventually the basket arrived together with a strange metal contraption that held two metal bowl type vessels with a carrying handle, a bit like a bucket. Once I had waddled back to my abode I viewed what delights I had been provided with, clearly not just the bread and cheese I had been told to expect. Now not having been given the most warmest of welcomes and clearly not feeling as those I was even welcome I had dared not mention that I do not eat anything with a face on it. Fearing that if I had I would have been ex-communicated on the spot and made to walk in sack cloth and ashes all the way to Rome.

My greatest fears were soon realised. I had been provided with what look like two soups, one with lots of dead animal things floating in it and the second that looked like dish water. Now I am not ungrateful for the the kindness that I was shown with the food , but I am sorry some things I just can’t do. I chose to ignore the soups and went for the luke warm overheated, congealed macaroni cheese and a yogurt. Feeling decidedly sad, tired and definitely that I did not want to be there myself. I went to bed at 8pm. Every now and then getting up to see if I could see a taxi outside to take me away………….

Posted by Happea Travellers at 05:44