I had decided to throw caution to the wind and get the bus to Portarlier where I was to base myself until Thursday, hopefully by then I would be able to continue walking the planned route to Rome. My choice of getting the bus meant that I had be up just after six to ensure I took full advantage of the all you could eat breakfast buffet again. Both targets were met and just before 8am I checked out of the hotel.

At 8.30 prompt the bus arrived and now feeling confident with speaking a Yorkshire dialect French I asked for my bus ticket and was very surprised to be only asked for only three Euros. Now this must be either a child or pensioners fare surely……non. By now I was feeling even more chuffed with myself because if I had taken the train it would have taken me thirty minutes longer, involved two station changes and cost an additional thirteen Euros. Well at last something was starting to go right. 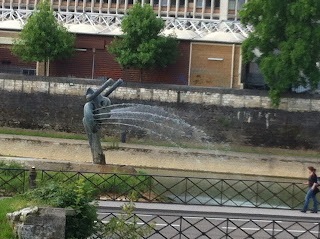 The journey from Besancon to Pontarlier is the same direction I would take if I had been walking and I will have to return to Besancon if my journey is to be completed properly. With that in mind I gazed in awe at the landscape that rolled out before me. A steady climb out of the valley from Bescancon that seemed to go on for ever. With high granite cliff faces swathed in lush green canopies of trees that stretched as far as the eye could see, I knew that walking through this I would be faced with an interesting journey. Thinking that we had reached the top we rounded a corner only to be faced with more of the same. The bus confidently swept round the corners with a huge drop to the valley floor on the side that I had chosen to sit. I confess I did take a few large deep breaths as the rear tyre scuffed the kerb stone and on occasions with just a very low stone wall from certain doom, I prayed the driver would not suddenly sneeze or decide to answer his phone. From one valley we progressed through a tunnel in the cliff into the next valley before we left it behind as we had reached the summit over 800 metres high. 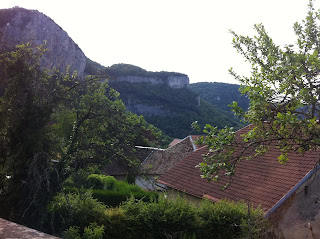 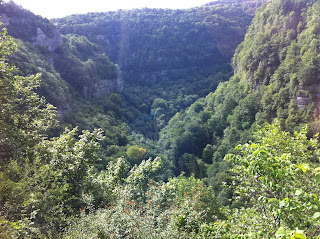 The landscape changed and now continued to be a rich verdant green with lush meadows being grazed by happy,  lazy doleful cows in the sun. Soon we were approaching Pontarlier station and the end of my journey.

With my rucsac once more on my back I stepped off the bus in search of my accommodation. As promised, I found it close by and checked in. I was greeted with some surprise though when I asked if it was open all day so I could rest my feet. It transpired that it is closed between 10am and 2pm when I could then sneak in using my keycard on the night door at the back of the building. I wandered to my room, a four bedded one rather than the eight I had expected, and with a balcony which I will take great advantage of. As there were no secure storage lockers in the room I removed items from my rucsac I didn’t mind losing and with the rest remaining where they were I went into town for my second coffee of the day and a mooch around.

Wee Man even managed to jump in the fountain for a cool down........ 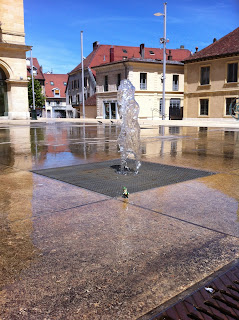 Pontarlier had a history with Absinthe, since the early 19th century it was forbidden to be distilled. I believe this tradition has been resurrected more recently and aside from that it is not a very big town and only a small heart to it. I am sure with my limited movements, as I am forced to vacate my abode, I will get round the centre a few times.

Posted by Happea Travellers at 00:44