Our previous night's evening meal was an interesting one. There was no sight of a restaurant open in the old town and after buying provisions for the next day's walk we headed into the new part. Again there was no clear evidence of anywhere to eat so I switched to searching the internet. Only one place appeared to be a possibility but the reviews on Trip Advisor mentioned the grumpy owner and how he told you what you should have to eat.

Good fortune was not on our side, we were both tired and hungry and a little grumpy ourselves so rather than walk around in search of anywhere we returned into the old town. As we headed back to the chicken shed we saw lights come on at a restaurant. We stopped and gazed at the menu as someone came out of the restaurant and totally ignored us. Desperation has a mind of its own and we   decided that short of resorting to cannibalism we'd head inside.

Needless to say it soon transpired that we had entered the same restaurant with the grumpy owner and, yes, despite me trying to ask for one of the dishes to be made vegetarian, he told us what we were going to eat. We both just said..."Si" ordered wine and proceeded to just get merry.

The food was not too bad, the wine was young as Claire declared and the price was cheap.....how could you not be happy with that. Well I guess when you had not ordered it!

The night past without further adventure and no cockerels woke us up as the dawn broke. We dined on fresh eggs and toast for breakfast all washed down with strong hot coffee.

With our packs loaded and once more hung on our backs we set off bright and early. We descended out of the medieval town into the Parco deal Treja, a lush green carpeted valley, peppered with young chestnut trees. By mid morning we were walking past Monte Gelato Ranch, I was curious to go and find out if it truly was a giant ranch made of ice cream, but the urge to reach Sutri by mid afternoon stopped me in my tracks.

By 11am the slow trickle of Pelligrini coming the other way, heading to Rome started. Again all different nationalities, some with stories of where they had started, some just clearly not wanting to stop, but all cheerfully saying "Buon Camino". We have decided that from just before 11am to about lunchtime it is now called Pelligrini time!

Claire had a her first taste of what was to be in store historically on the journey to our end point, Massa, as we crossed over a Roman road AD 3 that looked a lot fresher than we felt.

Midday saw us arrive at our half way point, Monterosi and once again it was boots off and feet up as on this occasion we sought the shade from the hot sun, today it was going to be in the late 20's. After a thirty minute rest, we went in search of a Tabbachi to buy fresh water and once our bottles were full we continued on our way. 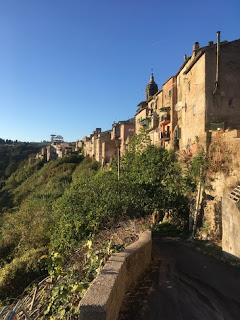 The second half of the day was a leisurely march between one of the biggest golf courses I had ever seen and then once again though hazelnut orchards on both sides of the track. At 3pm Sutri was in sight and the final leg saw us walking along the via Cassia main road to Rome and alongside Etruscan caves carved out of the tuffa rock.

We stopped at the small Roman amphitheatre that is also carved out of the tuffa rock but unfortunately it had just closed. I was keen for Claire to experience seeing it from inside and in my best Italian I asked the attendant if Claire could be allowed in. I mentioned that we were Pilgrims walking from Rome and we had just walked 28km to get to Sutri. My charm paid off and Claire was allowed in, and yes she mentioned it was a worthwhile experience. 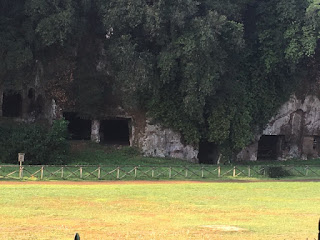 Our accommodation for the night was a bed and breakfast in Sutri itself, a beautiful village perched on a huge tuffa rock, with evidence of Etruscan and Roman occupations all around. We could not get into our bed and breakfast before 4pm so we made our way to the main square to sit down and have a beer, another daily ritual that we were to undertake.

We were soon surrounded by other Pilgrims that had come from the other direction, swapping stories and laughing at our individual experiences. With beers drunk we head off to our accommodation which turned out to be a fabulous apartment, tastefully and artfully decorated by the owner Vittorio. The icing on the cake for both us was Rocco the dog, the most mild mannered and placid of pooches either of us had met. Rocco was a stray, something that is common in Italy, and had found Vittorio by chance and was soon ushered into his home and becoming part of the family.

We were told that we could not take Rocco with us and that he was not staying the night as both owner and dog were going to Rome later that night.