A new day, and the beginning of the creation of a new Pilgrim route.

In AD 595 Augustine was sent by Pope Gregory on a journey to Canterbury, England – this was known as the Gregorian Mission. Augustine left Rome and sailed to the small Lerin island, near Cannes, off the South of France, home to the Abbeye of Lerins a Cistercian monastery AD 410. The small party of about 20 monks then walked through France, sailed across to England, landing at Ramsgate before continuing to Canterbury.

Shortly after AD 597 St Augustine founded the great abbey of Canterbury ( not to be confused with Canterbury Cathedral ) marking the rebirth of Christianity in southern England.

Abbey Walks' mission is to recreate that journey and record it for other Pilgrims to follow. It is not possible to follow the first part of Augustine's journey from Rome to France by boat so the first part of the journey will now be completed on foot. The whole route will be recorded in three parts starting in 2017 and will hopefully be completed by the end of 2018.

It is hoped that once completed, mapped and recorded the whole route will be walked in    2019 as one journey. The aim will be to stay in or visit as many Augustinian places of refuge or worship along the way.

On a peaceful sunny Sunday morning we set off from St. Peter's Square and walked through the suburbs of Rome before ascending into Monte Mario park with a breath taking view back to the Vatican City. It was a slow climb but well worth it. 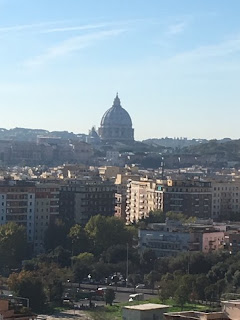 When Claire and I walked together last year 2016, I introduced her to the Cornetto a le crème, basically a vanilla creamed filled croissant. It became either our staple breakfast or second breakfast.

Our first day was hot with hardly a cloud in the sky, and the climb up into the park with our packs on soon had us looking for a place of refuge for a coffee and maybe our first Cornetto of 2017 ! Sunday is family day in Italy and we soon came across a bakery ( panne) with a small café. The place was very busy but a table was secured in the midday sun.

Our packs were dispensed on chairs to make them easier to get back on, and soon we were indulging ourselves in our first Italian coffee and our first Cornetto -  we were not disappointed. We both agreed that this was probably going to be the best one yet of 2017, it was that good.

After a 20 minute break we donned our packs and set off again. We decided that the via Cassia route to La Storta was not the best route as it was the main road route into Rome with almost no footpath for pedestrians. Instead we decided to walk through the Reserva Naturala, a lovely green corridor mixed with parts of the original Via Francigena path. Our journey in the opposite direction to the normal route meant that we met several Pellegrini on their final day of their own Pilgrim journey to Rome. American, Italian, Dutch and English all with their own stories and reasons for completing the journey. Buon Camino being the final words spoken to each other.

We are both 'posh walkers' and part way through the Riserva we stopped in the shade and dined on fresh advocado, tomatos and cheese, with fresh satsumas for dessert. With our energy reserves topped up we continued on our journey savouring the peace and tranquility knowing that it would soon end once we reached the via Cassia.

I had not walked this route into Rome in 2016, so it was all knew territory for me and will certainly be a route I recommend to be walked either way in the future. By mid afternoon we reached the via Cassia and we slowly climbed our way along the busy, smelly route lined with queueing cars heading towards Rome. It was not a pleasant journey but a necessary one. With heads down we just got on with it and after a couple of hours we reached our final destination the Hotel Cassio.

As we checked in, we grabbed two bottles of beer to take to our room, and water to rehydrate our hot and tired bodies. The room was simply furnished, we had a roof over our heads and we had a lovely balcony with crazed (well broken, but the effect was good) perspex panelling, and the via Cassia below.

We sat on our beds, feet up on a chair, balcony doors open and savoured the vista and sounds of traffic before us. Day 1 completed ! 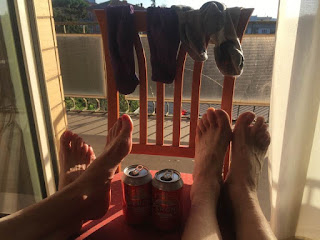 Posted by Happea Travellers at 12:57