After a good night's sleep we both woke fairly early for breakfast which consisted of a reasonable buffet of fruit, yoghurts, eggs, the usual croissants, dried crisp toast and cake. We made use of these offerings which also provided for our lunch too. We also  made a bee line for the local supermarket on the edge of town to stock up on fresh tomatoes, avocado and cheese. This was to become our staple diet for future walks.

The journey was a pleasant one out of the town and soon we were leaving suburbia finally to be absorbed in the lush green countryside adorned with peace and tranquility, something we had strived for when we left Rome the previous day.

The first part of the day was an easy and pleasant journey along quiet country tracks through Isola         Farnese. The main hillock just before the turn off the road being the site of a small medieval fortified     settlement, now just one residence but formerly belonging to the important Farnese family. 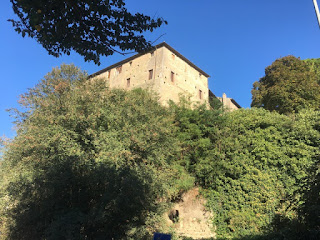 At one point we almost had to act like sheep dog as we chased a flock of sheep along the track together with the farmers dogs. As the animals moved along the bells around their necks tingled and rang out and I felt like bursting into song about a lonely goat herd, just like Mary Poppins........much to Claire's relief I refrained and just sung it in my head.

The last time I had been this way I had had to ford a stream, my guidebook mentioned a potentially dangerous river crossing but it was more like a puddle the last time I crossed it.

The Via Francigena attracts a lot of European funding and since my last journey there has been a lot of improvements made, including new signs. On this particular section the dangerous river crossing has been replaced by a bridge so now we will all stay safe Pilgrims and not be swept away never to be seen again!

We pressed on trying to interpret reading the guide book in reverse which is not as easy as it may sound. Between scratching our heads, looking around to interpret the notes and retracing our steps it took a little longer to reach our halfway point, the historical town of Formello.

We stopped in the main piazza of the old town at a small locanda, order two small beers, took our shoes and socks off and put our feet up. This ritual, not the beer unfortunately, is an important routine that has to be undertaken at almost every reasonable lengthy rest period, to keep the feet happy and eager to carry us on to the end of the day.

Once the beers had been drunk we moved into the piazza of the new town and under a shady tree we sat down once again and dined on the fresh produced we had bought and the stolen boiled eggs we had relieved the hotel of. Well the eggs had not wanted to stay there anyway...........

The day was to be a long one and up to now we had not seen any other Pelligrini. Soon we were on our way, there was a steep ascent out of Formello but with heads down and by just concentrating on putting one foot ahead at a time we reached the top. We were relieved to be blessed with a gradual descent along a quite country lane but as the route changed from Tarmac to a stone track the way ahead started to climb as we meandered through the Sorbo valley. Eventually we reached the summit, but definitely not the last climb of the day, and the Santurio della Madonna deal Sorbo. A beautiful buff coloured church that sits on the edge of the hill and visible from almost every direction.

As we changed direction and started to descend slightly our path switched from stone to Tarmac once again, providing our feet with some slight respite from the sharp stones. Our lesson for today was that every time our path ahead goes down it usually means that before long it will start to climb and our final ascent into Campagnola was a long slow steady climb. I half expected to see a set of pearly gates and angels sat outside playing harps at the top.

On our final mile into the town we past an Irish Pilgrim heading to La Storta. I mentioned the lateness of the day and how far he had to travel. He confessed that he'd had stopped for a beer and a rest that had then turned into two beers. I refrained from introducing him to 'Wee man' as that would have only deterred him longer. 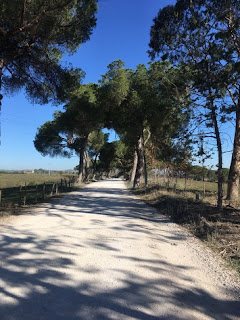 By 5pm we entered the piazza just outside the old town. It seemed that it was the main point for most of the locals to congregate and just chat. I half expected for them to jump up and start cheering, a band to start playing music as we walked the final metres. None of that happened.........

We briefly paused to locate our abode for the night.........."The chicken shed". We followed the Via Francigena to the edge of the town and soon heard the distinct sound of English voices..... Well a man from Seattle and a women from the Netherlands.

With bags off our backs we settled into our chicken shed for the night......and despite its name.......it was quite comfortable for the price!

abbeywalks.co.uk
Posted by Unknown at 09:59