It was a cloudy and cool start this day, but we were happy with that.  We meandered back into the old town of Laon to pick up our route from yesterday.  We bumped into our new best friends Jenny and Jess who were doing the same but were ahead of us, so to speak.

We descended from the hill town down a very long, steep and bumpy cobbled street.  My bike had been rained on the night before and the brakes were wet so it was a very noisy / screechy descent.  The ground soon evened out and we were back onto familiar flat country lanes.  Flat didn't last long.

We were heading for Corbeny.  The afternoon route countryside became quite rolling, with regular steep and winding hills.  My right arm sprang into action taking the majority of the bike’s weight and heaving it up the hills. It didn't ache as much as it had in the past - just shows what big muscles I now have !

Tony and I went our separate ways mid afternoon for me to check out an abbey ruin to see if it was worth Tony doing a detour to see it.  It wasn’t.  During the time that we had spent apart that afternoon Tony had met up with J and J again ( he had found them snoozing in the woods ).   It was good to see them again and to have different chat to the standard R and T …

After an hour or so of walking two by two we heard what sounded like a cat’s meow coming from a corn field.  We stopped in our tracks - it was indeed a cat, in fact a lovely black and white rather thin kitten.  Kitten came over to us very quickly and continued to meow with great purpose - that purpose was for us to help and feed it ( we assumed ).  We were in a very rural area so this kitten had become very very lost.   We continued to walk, but kitten followed us almost tripping us up with getting between our feet.  We walked faster, and it trotted faster to stay with us.  To cut a long ( and heart string pulling ) story short, the kitten was having a last ditch attempt ßat survival and we decided to help.  I carried wee kitten ( who seemed very happy for the rest ) for about 2 miles until we came to our destination village.  I approached various strangers in the street with kitten in arms asking if they wanted or knew anyone who wanted a kitten, but to no avail.

When we arrived at the hotel a lovely English family were having a pit stop before driving on to Calais, Molly their daughter was very keen to take the kitten home to England but it was explained that it was not very practical. The landlady at our hotel didn't want the kitten, neither did the lady who worked in the Ladies Wear shop, or the man and woman who were sitting in their car drinking cups of coffee outside the church.  The church was closed.  We had a problem.  Then I spied some teenage girls !  Jess, Molly and myself bounded across the road with kitten still in my arms and explained the predicament to them.  They informed that the Boulangerie had recently lost a cat.  I spotted my opportunity and asked the girl if she could possibly take the kitten to the Boulangerie and explain the situation to them ( french not good enough etc etc ), to which she agreed.  I quickly passed wee kitten to this girl and we made our escape before she changed her mind.

We saw the 3 girls walking through the village an hour or so later carrying the kitten like a baby - that was a good sign we thought.  Job done. Molly was keen on the idea of having her own kitten and drew a picture of it while we all chatted about our adventures in France.

The four of us dined that evening at the hotel restaurant (three courses), as part of the walkers hotel deal (£53 DB&B), we ate everything and had a great evening together.  We had a day together planned for tomorrow too. 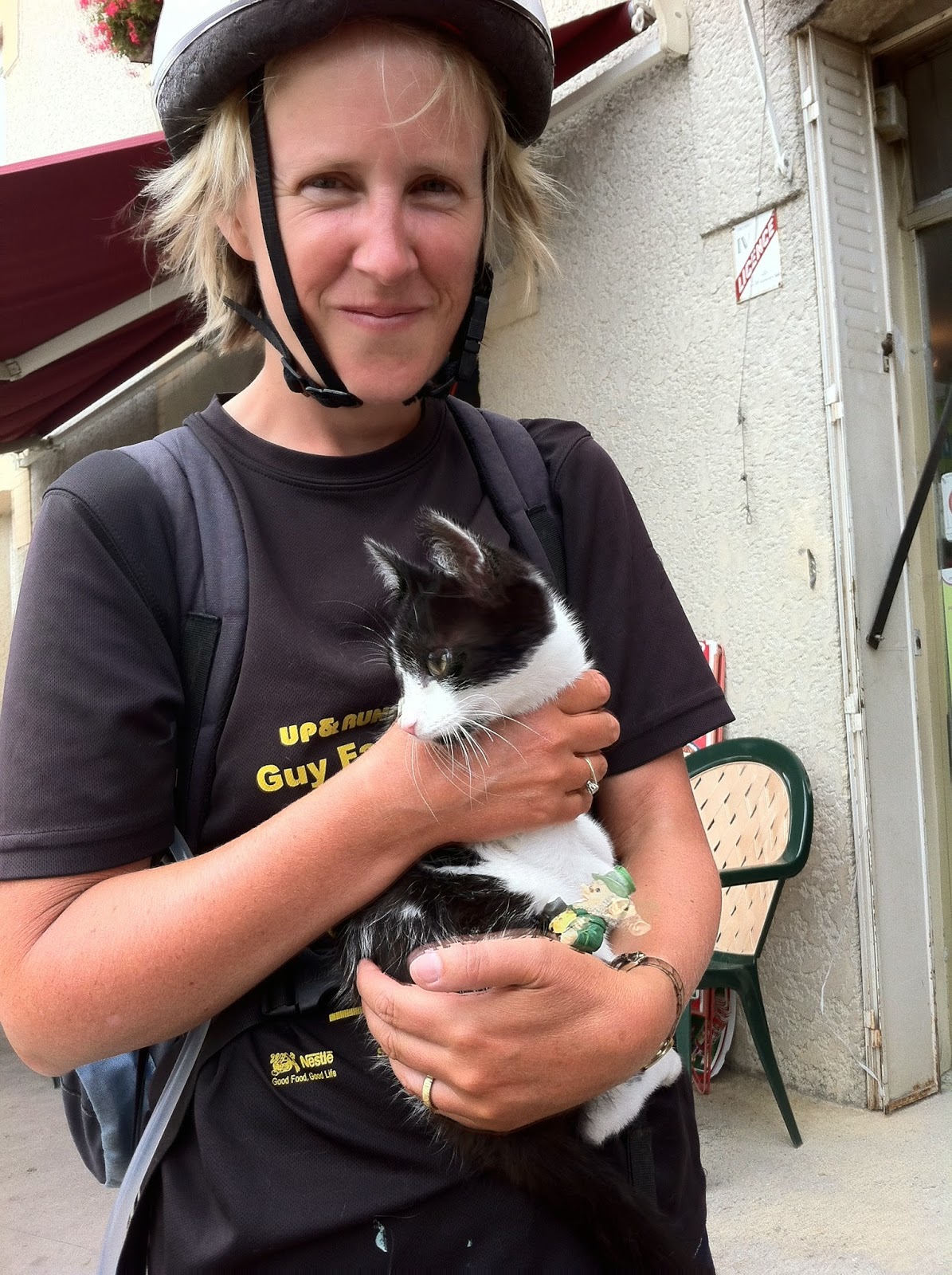 Posted by Happea Travellers at 12:21