Well a very hilly day today from Sarzana to the medieval village of Caste, perched on a hill on its own. Total population 15.

The route initially took us along a very busy road where we took shelter behind a crash barrier for 1km before leaving it in the distance. We've walked along cobbled pathways and up and down steps carved in the ancient woodlands as we passed through villages and hamlets. Just after midday after a strenuous ascent we were rewarded with a stupendous view across the city and gulf of La Spezia called the Poets fountain.

After we passed through the hamlet of Straw we once again ascended the hillside to the church of Pieve di Santo Stefano, now currently undergoing restoration, but in the Piazza we were once again rewarded with an unspoilt view over La Spezia. 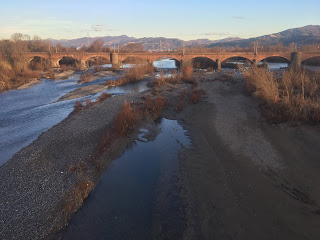 The final part of the day saw us descend down an ancient stairway and through a small wooded valley before final crossing a Roman footbridge to reach Caste. Our accommodation is on three floors and shaped like the letter L. One room at the bottom and three bedroom at the very top. It's old, rustic and belongs to an artist and is suitably dressed and adorned with his artwork on the fabric of chairs and pictures. The middle floor has the original frescoed ceiling.
After 24km, a bottle of the local red wine and a scrumptious simple meal because I had to carry the ingredients in. We all settled down to relax and were in bed by 9.15pm. 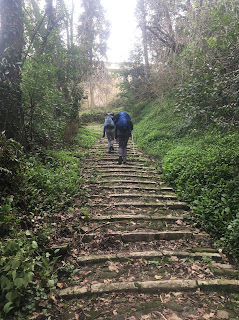 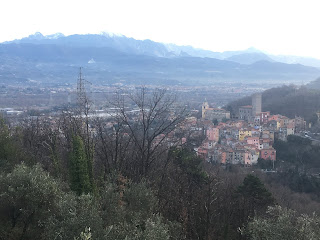 Posted by Happea Travellers at 09:38