Day 6
Chiavari to Camogli 21km
After a good nights sleep and and even better night being wined and dined with Joanne, Claire and I set off just before the daylight broke. We were leaving Sue behind again today but she was going to join us for the last 6km for climb up to and through the Portfofino National Park.
The air was cool but not cold and we sat outside for breakfast at a little cafe near Piazza Mazini. We popped our heads into the Signora dell'Orta Cathedral with exceptionally large frontage and rather too much, inside less opulent. Our journey continued to weave through the suburbs, eyes fixed to the pavement to avoid doggy landmines that have been unfortunately all to common on our walk so far. 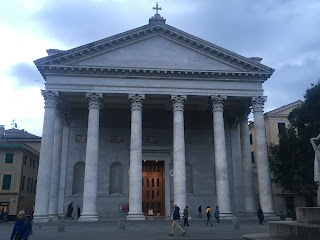 After a quick climb up through the woods and past a world war 2 bunker we reached the Sanctuary delle Grazie that provide unspoilt views back to Chiavri. After taken advantage of a water fountain we pressed on all the while slowly climbing before levelling off to reach the church of San Pietro in Roverto.
Steps both up and down have become our usual way of traveling on this voyage of discovery and today was going to be no exception. Unfortunately I had committed to start counting them before we set off on day 1 and I was not going back to start again. 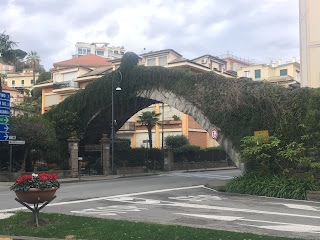 We descended, yes down steps, weaving along a small alleyway that eventually brought us the the town of Zoagli, gazing in wonder as our walk notes had told us to as we descended down steps from above another church. Crossing the Piazza children were laughing while they enthusiastically played football and another group of smaller children sat patiently on a wall waiting for their teachers next instruction.
We passed through up more steps and then along an ancient cobbled pathway set in the olive groves of a peaceful hillside. It was nice to be at the top as it was easier on the legs, the steps are starting to take their toll, certainly for me. We weaved our way around the winding road, with olive groves and vineyards scattered in the hillside, before descending into Rapello.
Rapello is another of the sea fronted towns situated in a large cove but had clearly once been a main thorough fare for the Romans. We passed the very large single span Roman Bridge called Annebel, not sure why that is but it is a nice name. It is reputed to be more than 1000 years old and at one time had a river passing underneath it, unfortunately and very sadly it is a busy road. 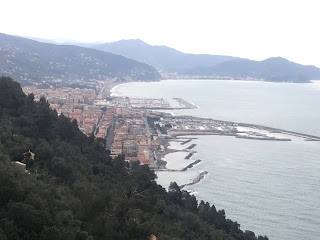 In Santa Margherita (14 km) Sue joined us and we all sat and relaxed in the sunshine by the marina eating our lunch. There was a bit of a nip in the air so we did not loiter too much. With one more hill, and a big one - 500m, Sue removed the extra 2 kilos she did not need to be carrying and passed it onto me. Yes, chivalry is not dead yet.
The journey was arduous to say the least and in places very steep and interspersed with the odd group of steps. We steadily made our way up through the Portofino National park, part way up heading layers as the combination of the humid air and sunshine rapidly heated us up to near melting point.
At the top we were expecting fabulous views but all we saw was the way we had come and if there had been a more direct path we could have saved time and distance. By a strange small wetland area that had been created by the side of the path, we turned left and made our slow descent to the end of the day. Passing a small shrine and a picnic area side by side the walk notes had mentioned passing ceramic polychrome of Via Crucis! In English this turned out to be religious shrines depicting scenes from the bible, all completed in ceramic mosaic tiles. 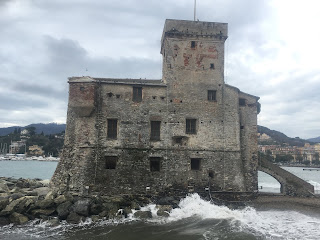 The final part of the day saw us winding down a very steep path through small clusters of houses only accessible by the path. Part way down we had to step t once side as a moped came hurtling down the hill with a small child on. Fortunately the path has a small slope on side for such purposes and although I can ride a motorbike, I don't think I would have liked to be going up or down the path on one.
Tonight we are staying in an apartment with a balcony and sea view and I think Claire is coming down with Sue's lurgy as she is tired this afternoon.