Day 4, 19km.
Sue was definitely under the weather and with the lurgy she decided to not walk and continue by train to Moneglia. Claire and I popped next door to the bar for our now regular Cornetto (croissants) a la creme's and coffee and with breakfast over, fresh bread and focaccia for elevenses to nibble on, we were walking along the promenade of the seashore.
After just 10 mins we were once more climbing steps and ascending from sea level to about 200m. After crossing a road we headed downhill on steps and then narrow pedestrian streets. The guide notes which I'd loosely translated into English mentioned passing villas with gardens of beautiful blooms......mmm it's winter what should we be seeing now we both questioned. 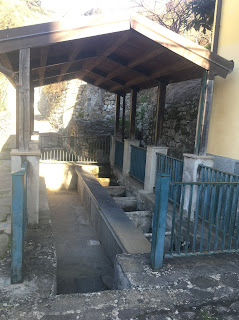 We quickly passed through Bonassalo and once again we were soon climbing the hillside and passing through the scrubland. As our path turned the corner of the headland the sea unfurled far below us, a vivid turquoise blue in the sunlight. Our path took us very, very close to the edge of the cliff and as Claire got her phone out to take a photo, it dropped out of her hand. It skittered and bounced forward getting closer and closer to the edge and then over to thankfully come to rest at a thorny bush. Claire gingerly made her way to retrieve it and yes as I write this she is still with us and did not fall over the edge. It is difficult to put into words just how spectacular this section was and how narrow in some places it was. It has to be experienced, but you have to like heights. 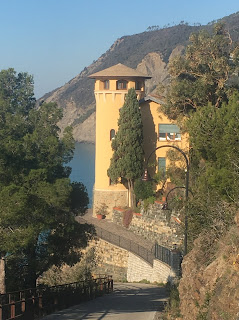 What ever goes up always has to come down, I think I'll mention that to Archimedes. At the end of our path we descend a very steep, rocky path, very very slowly, passing through the Valley of the Blades and back along the cliff top to Framura.
No sooner we were down then we were back up again, passing through the sleepy hamlet of Anzo before climbing a monster set of stairs that just went on and on. Thankfully at the top there was a picnic bench but no oxygen tanks to replenish the lungs.
After a much needed rest we meandered along typical Ligurian narrow pathways through Ravecca and Sette two more small hamlets. The latter with an ornate Lavoire (Wash house). We continued to climb and at the top met several gunmen out shooting, I assumed wild boar.....anything that moved. A walker, who passed us by said "Don't worry they don't shoot foreigners". Mmmm were not convinced! 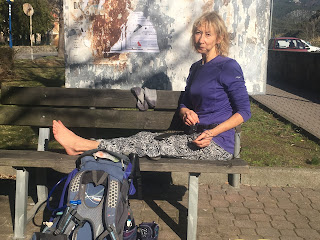 At the end of the track we descended a very steep, rocky, slippy path. Part way down we met someone that we thought was maintaining the path. We exchanged the obligatory Buongorno's and it transpired he was making soil ramps for his mountain biking friends.......I politely mentioned that he was loco. How and why do people come down such ridiculous terrain on a bike? Probably because it's there.
Once on level ground we progressed into Deiva Marina, found two benches, one each and with boots and socks off we had lunch. It is so refreshing to have your hot sweaty little piggies kissed by a gentle breeze while you rest.
After a decent break we redressed and burst forward for our final ascent of the day - 2km uphill from sea level to 350m. Our path initially was on a concrete road but at the end we headed into the woods and up again. We had mentioned to Sue what our route would be and how long it would take and at the top..........there she was.
After squeals of delight from all of us, we made our way, all together down to Moneglia, happily chatting away once more.

Posted by Happea Travellers at 11:14