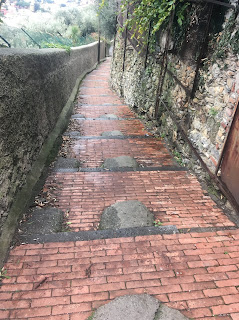 After two mild cloudy days we walked today in a mix of light and heavy showers drifting in from the sea. Our first opportunity to try our new walking ponchos arose when the heavens opened. We sheltered in an open garage and donned our ponchos and waterproof trousers. Sue’s was the best one. Claire had not tried hers on with a pack and once on it looked as though it had been sprayed on, it was that tight. She decided to revert to the over the top look instead. Mine, well it was easy to get on but required a third party to pull the back down over my walking pole. After deciding to wear my waterproof trousers at the last minute, the giving birth technique worked better. Simply described, take off rucksack from under the poncho and reverse to reapply.....much easier and perfect if you have no friends.
Photographes of us wearing them will follow, just imagine Quasimodo and you’ll get the idea 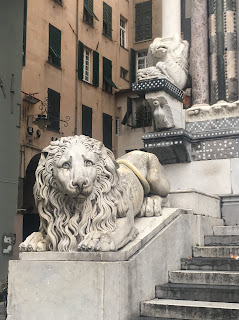 Our journey took us up and down along narrow paved pathways following the undulating contours of the coastline, softened in comparison to previous days but nonetheless with numerous steep, near vertical flights of steps up and down as we made our way from Camogli with atmospheric, dusky early morning light over the pretty harbour. We passed through Recco up to the Torre on the headland, jamming ourselves and packs alongside newspaper reading locals into a small village roadside bar en route for our usual cappucino/Crema cornetto Calzione ( breakfast).
We descended into the pretty village of Sori, yes that's it's name and then climbed once again through woodland to Pieve Alta before descending to Bogliasco where the huge stone viaduct carry the sea hugging railway line over the beach and town. Once more we ascended steps and weaved our way along terraces to the Santa Maria sanctuary and over the final headland down to Nervi where we lunched at the White Bistro. A food heaven, with a fabulous young owner. We dined on fresh home made focaccia of various combinations and chatted to the locals, one of which was heading to London that afternoon 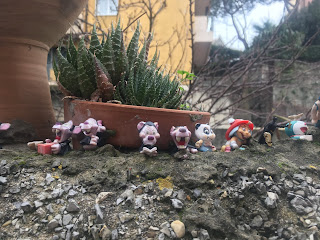 I continued alone to Genoa whilst, both weary from fighting the Lurgy, Sue and Claire. My journey continued through suburbia, meandering around the narrow streets and finally the last few kilometres along the traffic snarled roads of the centre. As I made my way to our accommodation for the night I spied two women with rucksack on looking very suspicious, hang on that's Claire and Sue I said to myself. 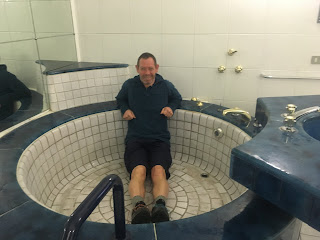 Tonight we are in an apartment that overlooks the Cathedral, literally you could almost touch it. On the 5th floor, yes there's a lift, it's early 1900s, has huge high ceiling rooms, an incredible bathroom with central circular tiled bath ( quite big enough for four people ) and floor to ceiling windows which open and look out onto the substantial black and white, marble clad, impressively carved and decorated Duomo.
We celebrated Sue’s recent unexpected award by the Royal Horticultural Society for services to Horticulture, dining at (what turned out to be) a brilliant restaurant, Ristorante Rustichello. Tonight will be beans on toast at the Apartment !

Posted by Happea Travellers at 11:21