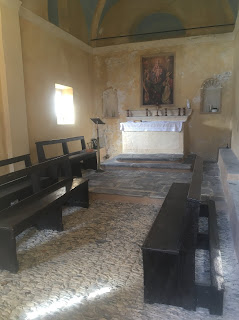 A cooler morning today and a later start due to breakfast only available from 8am. Ahead of me were three reasonable climbs but thankfully nothing that didn't look too strenuous.
I returned to where I'd left off and aside from the few bits of fruit I was carrying, omitted to buy anything else, this turned out to be a bit of a mistake. I'd also taken to prefer to get water from the drinking fountains rather than use water from the hotel taps.....again another small error on my part. But I guess a lesson learnt is one that is not usually forgotten.
Soon I was leaving the sprawling but very quiet town streets and heading along cobbled paths, tarmac roads and hillsides littered with olive groves to pass through the three medieval villages of Diano Calderina, Diano Serreta (my water stop) and Diano Gorleri. The latter being where I summited the first hill at 210m, with extensive views across the Gulf of Diano Marina.
What goes up must come down and I descended into Sacra Famiglia which is a small suburb of the coastal town of Imperia. As I walked along the streets in my own little world and elderly man approached me and uttered something I did not understand but I politely uttered Buongiorno........ He proceeded to repeat what he'd just said and pointed at a large pile of wooden pallets on the floor and then at his three wheeled truck, a Piaggio Ape. 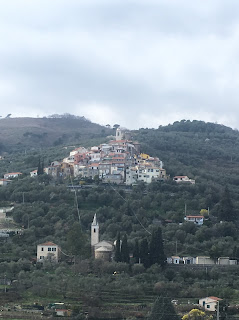 "Oh, you want hand with those," I replied in English. So with my rucksack still on my back we proceeded to lift 4 large wooden pallets onto the back of his truck...."Grazie, grazie, Buon viaggio (thank you, thank you, good journey)", he replied once the task had been completed. I'm sure I saw the truck springs actively groan
The Ape's are fascinating and I would love one. They are the commercial workhorse for most Italians. They have motor cycle style handlebars and an enclosed cab that has either one or two seats with a 175cc engine. They are seen everywhere. I will dig out a photo of one that I came across two years ago, owned by a young boy racer of about 16 near Aosta and add it to this blog......
My good deed completed, I omitted to take the opportunity of buying food from the Pane (bread shop) before I left town. Once across the Impero river which separates modern Imperia and Oneglia which is possibly a pre-roman settlement, I started to climb the second hill of the day. 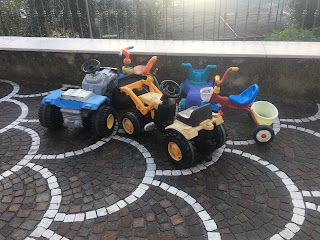 After a 2km slog on steep uneven steps, more tarmac and an old mule track, I was hot and sticky in the humid air. Finally I reached Bardellini Hill from there I had unobtrusive views of the valley of Imperia Porto Maurizio. I turned right on the road and over the course of about 2.5km my journey was a mixture of very short but steep uphills and then a quick descent, a bit like a rollercoaster but without the car. Eventually I started to descend, all the time continuing to pass between acres and acres of olive groves, occasionally dressed with large colourful nets draped between their trunks to collect the precious fruits before being turned into olive oil. At this time of year there is the occasional buzz of pruning or the crackle and wisps of smoke rising above the orchards as the debris is burnt. A lovely sound and smell. 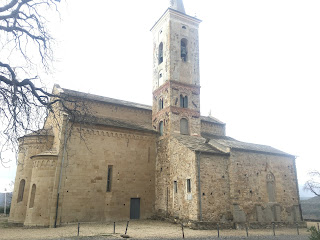 At the Sanctuary of Montegrazia I chose to take a bit more of a rest and starting to feel hungry topped up my energy supplies with the aid of a very tasty banana, whilst sat on the doorstep of a closed restaurant. The church (The Grace's Sanctuary) was closed unfortunately which was a shame as parts of it are 14th century and it is known as one of the most beautiful monuments of Liguria.
I eventually continued on my way through the olive groves on yet another old mule track, occasionally interspersed with steps to arrive at the ancient village of Caramagna. Now much more modern, a holiday hotspot and complete with its own olive oil factory.
At the edge of the village I had my first dog experience and one I would prefer not to repeat. I was unsure which direction the path was and hesitated by a house fence. No sooner had I stopped when two extremely vicious looking dogs leapt out of nowhere and proceeded to hurl themselves at the fence. Now not wishing to become dog food I quickly started to move and using my GPS tried to identify the correct direction. 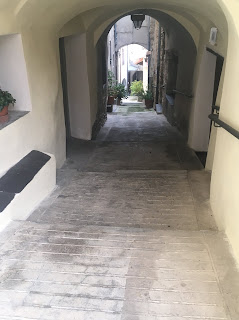 I made a turn to get back on the correct path and then looked forward and there in front of me was one of those viscous dogs.....parp! I think I may have uttered from somewhere behind me. I froze and just looked at it for what seemed and age trying to think how do I get out of this.......alive?
A car suddenly appeared from nowhere, screeched to a halt and a man shot out of the drivers seat towards me shouting scusi, scusi (sorry, sorry). He pushed the dog out of the way and off the path and as it turned, booted it up the bottom. It whimpered away thankfully. Now I don't like to see animals mistreated but I was grateful that he'd come to my rescue.
With my knees still knocking I continued the final few kilometres in relative peace. Once more on an old pathway to pass the 12th century Oratory of San Martino in Clavi and then across a medieval bridge before my final ascent to Torrazzo.
I had been hoping to finish the days walk in San Remo but there was obviously something taking place because everywhere was booked up in and around the coastal town. I had managed to find a bed and breakfast though in Torrazzo. 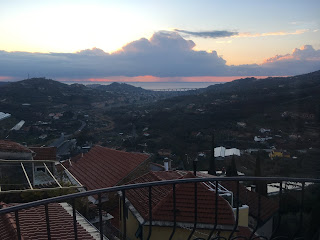 I'd arrived earlier than I'd expected to and informed the owners, so I sat in the sun in the Piazza and started writing up my walk notes. I was a bit hungry now so I fished out my last spare energy bar, took my boots off and put my feet up and got on with some work.
An hour later and starting to get a bit coo,l I called the bed and breakfast to say I'd arrived. Within 5 minutes someone came and I was swept into the house and up the stairs. My room turned out to be in the old tower and what a treat I was in for. Not only was it exquisitely and sensitively decorated, it was warm and cosy, and I had a balcony with a view all the way back from where I had come from....across the hills and the villages to the Ligurian sea. I just sat on the bed and drank it all in, unable to move.


Posted by Happea Travellers at 09:41