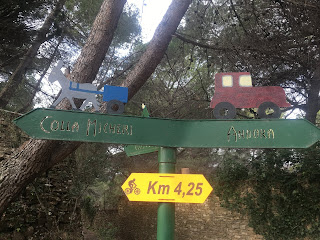 I woke early and after a reasonable breakfast I returned to where I had walked off the path the previous day. It was a cool morning but with only a few large fluffy clouds it looked like it was going to be a fine day.
Ahead of me were two fairly strenuous climbs before a few kilometres of flat walking to the coast for the evening. 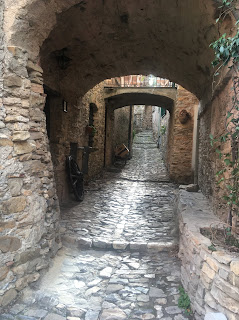 I meandered through the finally streets of Alassio before ascending 370m over 1.5km past the ruined 17th C church of St Bernard, it was slow going and it was warm despite being the first part of the day. At the top the whole of the Gulf of Alassio on one side, the Andora valley on the other and the Maritime Alps too unfolded all around me....I could have stayed there all day just drinking it in. The Alps looked as though someone had dusted them with icing sugar overnight. As I walked the ridge I could not help looking all around me not knowing where to look next.
Colla Micheri was the first Ligurian village I came across, blink too long and you'd pass through it. It's a sleepy place with a miss mash of higgledy piggledy narrow streets that you never see the end of. Each one showing something magical of the history, windows, old doorways, blocked in windows, ruined ground floor rooms where the animals once lived. The Via Julius Augustus Roman road 13 AD passes through it and it was where Pope Pius VII passed through whilst returning from his French exile. 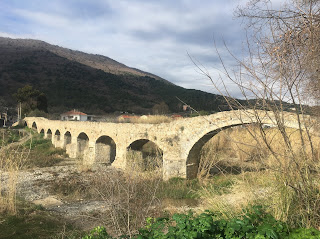 More recently the village became famous thanks to Heyerdal Thor, the famous Norwegian explorer and navigator who died on 18 April 2002. After travelling the world far and wide, he decided to spend his old age there because of the beauty of the location, the position and climate. His tomb is located under the sixteenth-century Saracen tower. With its dominant position over the sea and its circular shape it could have possibly been a windmill in the past.
I continued out of the village on the cobbled path of the Via Julius Augustus, narrow, steep but beautiful in its own presence. Past a large 13th / 14th century medieval water fountain before being privileged to walk on the 100m 10 arch Roman Bridge into what was once the Roman village of Andora. 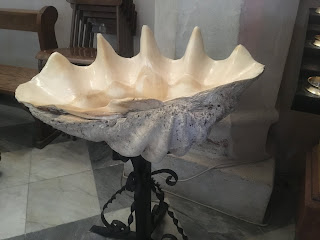 After digesting the historical mornings walk my second climb of the day took me up 380m through the lush vegetation again resplendent with oaks, holm oaks, the sweet smell of pine trees, thyme and broom. Once again I travelled along wide sections of medieval pavements that depicts the importance of the route between the valley of Andora and the Dianese valley. 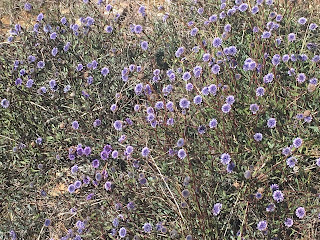 At the top I followed the ridge and slowly descended down to Cervo and what was once a Roman stopping point (2BC) on the Roman road of the Via Aurelia. A road I will be following once I have completed this second part of my walk from Rome. Cervo is now regular voted as one of the most prettiest coastal villages on the Italian Riviera, once you've seen it you will understand why.
I was now back at sea level and the day was hot and humid and as I was off the ridge now so I was soon getting back to walking in my t-shirt once again......oh I do have my trousers on too!
The final leg of the day saw me walking past large glass houses again, shimmering in the sunlight. In some sections the land is covered in carpets of black and passing by one such section I took a sneaky peek. Underneath there was a wealth of small green shrubs with what looked like red berries. I'm not sure what they are so if anyone does know please tell me.
At the ripe old age of 29 (well that's writers license for not telling the truth) I have started to rely on responding to my inner gut feelings and today was no exception. As I plodded along the road, late in the afternoon I thought that I'd either missed my turn off to my hotel or I was pretty close. I paused by the side of the road and using my Garmin tried to locate my hotel.............900m it replied!
With a renewed spring in my step I changed my course an pootled off to my abode for the night - 4pm and a perfect time to end the day. 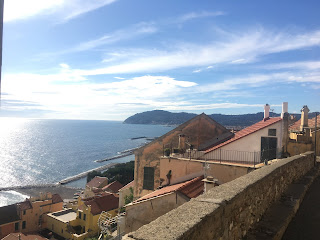