Day 9
Genoa to Arenzano 24km
We woke to clouds with a hint of sun and rain and left the apartment early, i'm well and truly lurgy'd now and Claire is ever so slowly recovering. 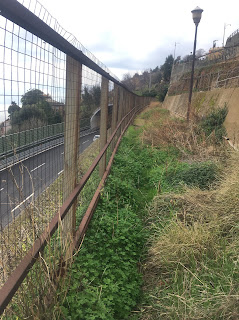 The walk today was a bit like marmite....you either loved it or hated it. "15km flat stretch of urban walking along the heavily utilised coastal strip which separates town from sea. Interesting but not pleasant, passing graffiti covered buildings, stacked containers, busy docks, factories, immigrants, poverty, dog poo; breathing in the fumes from car, lorry, motorcycle and trains whilst subjected continuously to their noise" - as quoted by Claire. Next time she's getting the train for this section
After 15km we reached Voltri and I was nervous about the next part of the walk. I was conscious that somehow we had to negotiate two motorways ahead of us and even walking the route virtually along the motorway, I was unable to see how we were going to get through......alive. 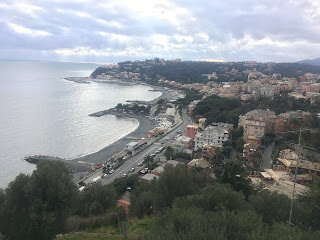 With trepidation we continued along the road through the village of Crevari until there was no road left. Our route continued between road barriers and along what was left of the old road although very diminished and overgrown. Between motorways we bravely walked on, the path getting narrow and narrow and more overgrown. Just I thought we were going to have to jump over the safety barriers and walk along the hard shoulder we spied what looked like a tunnel. 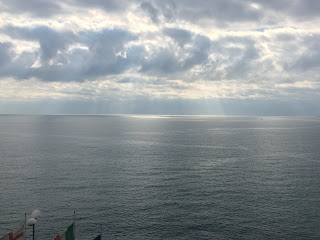 The path turned right and yes there was a tunnel blissfully unaware of the dangerous above its head, we were so pleased to see it. We safely negotiated the motorway and then skirted round to follow in safety behind a fence, with the road only feet away.
The final kilometres saw us winding our way up hill and downhill between the bridge bases of the motorways high above our heads. At one point carefully crossing where there had been a landslip before descending down to the quiet unassuming town of Arenzano. After a quick check in to our top floor apartment with balcony and sea view, we retired to the local bar for our first gelato.

Posted by Happea Travellers at 11:34