Day 16. Torrazza to Bussana Vecchia 25km
Total walked: 347km
After a super evening meal I was intrigued as to what breakfast would be like.....would it be just a brown breakfast of stale bread, shop bought chemically injected fruit tart etc? Non! 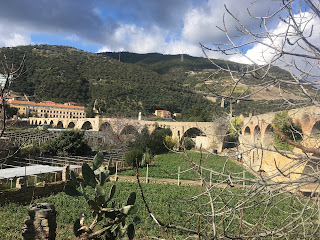 Breakfast was another gastronomic feast of delights. All the tables were laid for breakfast so I was unsure if there were ever any other guests. My buffet breakfast consisted of, fresh fruit juices, fresh fruit salads, fresh breads, pancakes, a meat and cheese platter. Fresh fruit bowl and copious amounts of scrummmy home made cakes to choose from and as much coffee as I could drink.....Burp!
I filled my boots and after settling my bill, was invited to help myself of goodies for my walk. I was close to the coast which meant that once again I had a number ascents and descents ahead of me. I was hoping to end the day at Sanremo but there was a music festival on and almost every bed had already been taken. Well I could have paid of €150+ but I am not that rich. I had found an Airbnb apartment in Bussana so that was were I was heading. 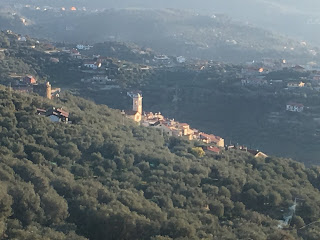 My first climb took me first past the medieval tower that sits above Torrazza and then after weaving around the hillside to the chapel of Madonna della Grazie (Our Lady of Graces). I paused to top up my water and admired the views back to where I had come from. It was going to be another humid fine day I mused to myself.
After descending to an old watermill, now a restored family home, I was quickly making my second ascent of the day. Initially it was a bit steep but once I was back on a road it was just a slow steady 4km walk up to the medieval fortress village Lingueglietta. The fortress being built to protect the village but now just a ruin. It turned out to be a sleepy place, with not a soul around as I passed along the narrow street lined with pastel coloured houses. One quick blink and I was heading out of the other side and continuing to climb a further 230m to reach the highest point of the days walk.
At the top I was met by the familiar ringing sound of bells that animals wear and the call of a shepherd as he moved his flock through the scrubby hill. His dog came over to say hello and received a short, sharp reprimand.......we both ignored the shepherd and got on with getting to know each other. Eventually I shooed him away and I got on with my walk, not knowing which direction had the finest view so constantly look around me. 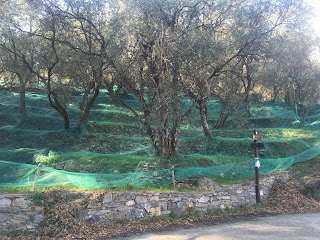 Once more on a road, my progress quickened as I made the long slow descent down to Castello and past the newly built 4 star golf course. From above, for me it looked totally uninviting with the motorway hurtling past one side and the uniformly shaped houses sitting so close to each other they almost blurred into one......mmm definitely not for me and some would say that chasing a small white ball .....is a waste of a good walk!
In what was once the Roman settlement of Tavia, now Taggia I crossed the medieval 16 arch bridge over the river into the old town and out of the other side into the modern trappings of suburbia. 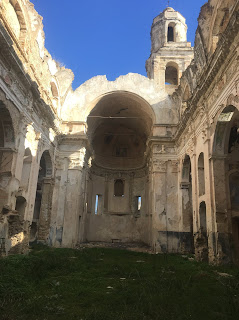 As I was going to be in an apartment that night I had decided to cook my own meal this meant carrying food in as I was not aware of any shops in Bussena. At the Trony shopping centre, which sold everything but food, I switched my GPS to locate a food store. Lidl, it replied, 600m, that will do nicely. I changed direction and took the small detour to the supermarket and stocked up with food for the evening. Now I don't know about you, but it's the simple things that I miss when I'm away.....like egg n chips. With supplies bought I returned to my path and the final ascent.
The route took me past and I quote my notes "past a colony", which turned out to be a large industrial house / factory. I have to admit that on occasions I have been nervous travelling in some places. This is due in the main to the amount of migrants that are now displaced in Italy and in some place in large numbers. Areas like the "colony" are perfect places that are large enough for them to stay without fear of being disturbed. I quickly passed by making as little noise as I could but did not see anyone.
As I approached the top of the hill and Bussena, Bob Marley was singing his head off. This turned out to come from a garden cabin with its two elderly occupants singing away to the songs too, totally oblivious to me. Obviously stoned! 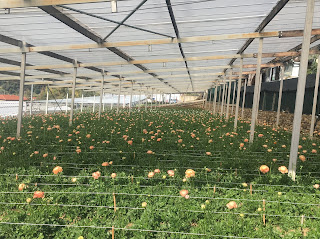 I had walked through Bussana virtually from my home office and knew there were two ruined churches and a maze of small narrow streets, like a bowl of spaghetti. In truth it turned out to be so much more and another one of Italy's gems.
The village had previously suffered from a major earthquake, hence the two ruined churches and all the occupants moved to a village at the bottom of the hill. In the 1960's local artists started to occupy and renovate some of the houses and so the repopulation began. It is now home to some of those same artists and musicians with a wealth of craft shops and studios to buy products from. There is even a resident jazz club. 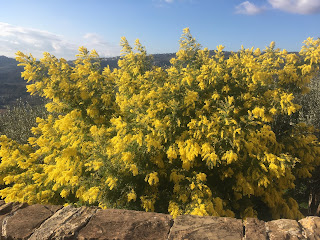 As I sat at a small cafe there were plenty of tourists mooching around. With my beer drunk and feeling rested I went in search of my room for the night. It turned out to be one of the former settlers, and Englishman and his son who were letting one floor of their house out.
The room was simple, comfy and with the aid of a portable gas fire, sufficiently warm enough. That night I settled down for my posh egg n oven roasted chips, washed down with a fine red wine.......heaven!

Posted by Happea Travellers at 09:49