Day 11. Savona to Noli 17km
Total walked: 231km
With just a short day we decided on a late start which was perfect for me as I am now full on lurgy'd. We popped across the Piazza for a lazy breakfast.
Before long we were tracing our steps back to the Cathedral where we finished the previous day. I just love Claire's comments and once again I have to quote her delights of the first kilometres travel. 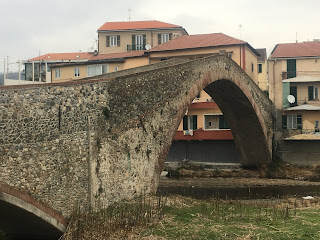 "The first 6km was an uninspiring drag along the edge of the noisy, car fume smelly sea front road, through down-at-heel suburbia brightened only by the colourful cake, bread, meat, fruit and vegetable shops and cafes, neatly presented with pride by their owners".
Along the way we spied one of Claire or Sue's lastest renovation projects. A large, elegant, but sadly dilapidated Art Noveau house standing in what was once a prime position by the sea, with beautiful gardens that were probably very manicured. It now stands sadly trapped between a main road and the urban sprawl of Savona.
At the back of the property were beautiful carved stone sea view balconies with elaborate wrought iron designs, now slowly crumbling. At the front below an impressive central tower sweeping marble steps grace both sides and the front. 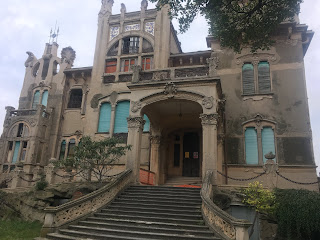 Our journey continued and took a small detour to cross a medieval bridge, also now sadly neglected. prior to returning the the sea shore we passed under a railway tunnel 1.7m clearance height......we just made it through.
We kept as close as we could to the sea shore but the main road on our right reminded us all to often that it was not to be a quiet first part of the day. In Vado we again took a break, this time for second breakfasts as well as killing a bit of time.
We'd been lucky so far and had travelled along an easy level path but as the heavens unleashed some rain we donned our Ponchos before venturing into the foothills and the penultimate climb of the day. There had been a large fire during 2017 and the landscape was still raw with the evidence. Fire blackened pine trees some clearly showing signs of the sap that had oozed out of it due to the heat. Like dripping candle wax that had set hard it was a sight to see. 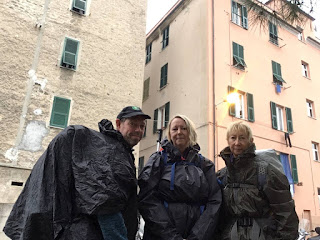 We descended on a loose gravel track along the hillside, past Roman Caves that were hidden in the dense foliage, to Spotorno. We were not carrying any supplies today as there was plenty of places along the way to eat. It was after 1pm and tummies were rumbling so we stopped at a cafe / bar that advertised no table service......not a good sign. Claire and Sue went into order and soon they were tucking into fresh green salads and chips al fresco whilst being watched by two young seagulls hoping for scraps. They were out of luck today and eventually grew bored and flew away. 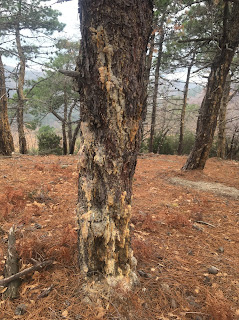 The air was getting cool and so we pressed on and the final short climb of the day before descending down steps and through the medieval gateway of Noli. We wound our way along the narrow streets and through a pedestrianised arcade to reach our B&B Casa dei Mombri.

After checking in and being received warmly like long lost relatives, we ventured out to wander across the beach on the wide sweeping bay, overlooked by the hilltop fort high on the hill.
Noli is a place to return to.

Posted by Happea Travellers at 10:02