I was the only guest at the B&B last night and although my room was not en-suite I had the bathroom all to myself and took full advantage of a long hot soak in the tub! Once my skin resembled a prune it was time to get out and do my washing….this felt a bit like being back in Europe on a long walk.

I was asked if I wanted to join my host for dinner and naturally accepted given that there was nowhere else to dine that I was aware of. Dinner was a homemade vegetable hot pot with a sponge and homemade custard for pudding…..it was delicious. 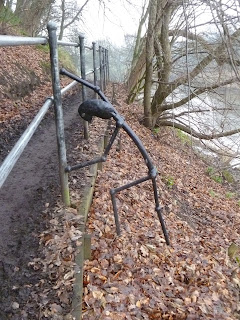 landlady over nothing and something. I was packed and heading out of the door. The air was crisp and cold but so I chose to walk with a jacket on. This proved a wise decision as in no time at all I was toasty warm. My route took me along an old railway line and to the village of Coxhoe. It was strange to be back amongst the hustle and bustle of people and cars. I walked along the main street before heading across the A1/M motorway. I always snigger to myself as I gaze at the traffic whizzing by and the drivers probably dashing off to work.

With the motorway behind me, I crossed another old railway line before dropping down to the River Wear. I continued along the river bank, ascending and descending through woods and along a hillside before reaching a garden gursery. My tradition of having a coffee and a wee snack developed from travelling through Europe has not left me. I checked that there was a coffee shop at the nursery and as I walked into the cafe looking like a wet, smelly, dirty homeless person, I could feel noise briefly pause and eyes falling upon me before customers carried on with their business.

The nursery was declared as a 'hidden gem on the doorstep of Durham' and judging by my
snack I felt that they weren’t wrong.

As I stepped outside ready to set off again the temperature had dropped sufficiently for me to notice. I carried on along the river bank and made a detour due to a landslide. I navigated my way through Durham streets the Cathedral and the end of the day.

Posted by Happea Travellers at 12:22