After a good night's sleep I woke looking forward to my breakfast. Little did I know what was in store for me. The previous day whilst visiting the Olde Tea Shop also owned by my B&B landlady, I had entered into a conversation about my breakfast. Having being offered and declined a full english because I am a vegetarian I was offered a mushroom omelette. After me cereal of Luxury Muesli my omelette arrived and OMG what a sad sorry thing it was ! Basically a limp affair, unadorned by anything except fresh air, sitting on a stark white cold plate !! 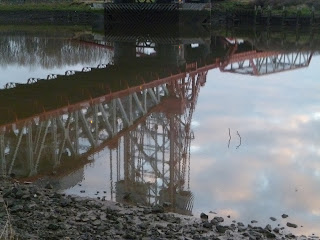 Disappointment over, I was on my way early as I had a long day ahead. My route took me
straight through a cemetery to reach Middlesbrough’s famous Transporter Bridge and the riverside bank to the edge of Stockton-on-Tees. I joined the Castle Eden Walkway and as I walked into the Industrial Estate I was approached by a dodgy looking person carrying an overnight bag and what looked like and ivory temple in one hand. I lowered my head, but as we drew side by side he asked “know where I can get some smokes mate?”. Mmm,  I quickly uttered that Asda was across the road and carried on without stopping. My route took me past the front door of Middlesbrough prison and I surmised that my “got any smokes” asking person had been a resident of Her Majesties pleasure.

I continued through the urban areas of Stockton interspersed with sections of the old railway line that seemed to be the favourite dumping place of all manner of household detritus….aren’t some humans just animals ,with no pride in the place they live in or near. 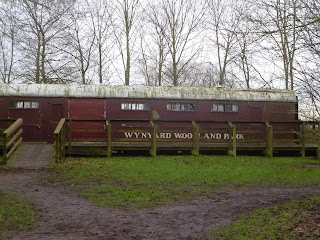 Soon Stockton was behind me and my route just went straight on and on and on. It can be tedious walking on old railway lines but this was a living breathing one. My first point of interest was the old railway station that had been converted to a tea room. With a full tummy of  freshly baked cheese scones and hot chocolate I set off once more on and on and on with no left or right turns. Occasionally I was startled as a bicycle whizzed past or a bike bell rang as it crept up on me. Every now and then a dog walker stopped for a chat which helped break the monotony of a path that just went forwards.

To the west of Darlington I finally broke cover and turned left. I had almost forgotten what 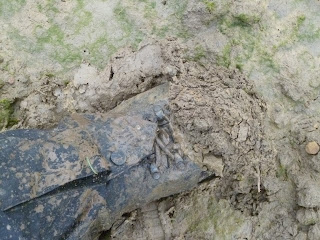 that felt like, it was slightly thrilling. As I passed through some woods something in my peripheral vision made me look to the left. Rummaging around the base of some trees was a man…..I thought he was looking for mushrooms but he informed me he was Geocaching.

The final stage of the day took me across several fields.  It was a slow slog as every step meant an extra layer of mud being added to each boot. It was hard work.

As I entered Trimdon the day was getting late and cold and I was pretty pooped, but I pressed on to my B&B, arriving just as the light was changing.
Posted by Happea Travellers at 10:15