The birth of a new walk

There is nothing like the winter weather to start new walks, and with that in mind today, and with snow on the ground, I set off to re-create a walk from North Yorkshire to Scotland. In the 12th Century the abbot of Rievaulx Abbey was Aelred.  During his term of office he was dedicated to travelling between the daughter abbeys of the Rievaulx Abbey family. Melrose Abbey in Melrose, Scotland was one of the daughter houses of Rievaulx and was the first Cistercian Abbey in Scotland. Aelred would have visited Melrose Abbey frequently, and with this in mind this new walk, which is likely to take 12 days, will be called St Aelred's Way.

Accommodation was expensive in Helmsley so after negotiating with the lady who wears the trousers in our relationship, she offered to drop me off for an 8am start there rather than overnight it locally. We woke up at home at 5am for me to finish packing last minute things. There had not been much more snow overnight and after checking the weather cameras at Sutton Bank, the powers of modern technology, we took that shorter route.

7.30am saw us parking the car in Helmsley square and a after a quick visit to get supplies for the next day's walk ( I had a packed lunch already for today's walk ), I was on my way by 8am. After saying goodbye, I crossed the road and just before I turned out of sight I was called back…………not that Rachel was missing me or that she was after a final goodbye kiss, no -  I had left my food supplies on the back seat of the car. With the food then packed away I set off again but didn't get across the road before I had to return back to the car again - I had forgotten my notebooks and pen. 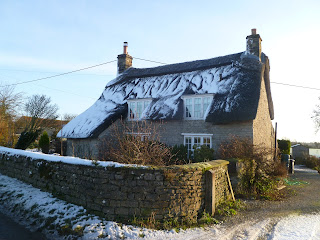 Finally, I set off and Helmsley was soon behind me in the morning sunlight. I had elected to take a more direct route to the North Yorkshire Moors. Rather than following the Tabular Way my journey took me across crisp snowy fields to the village of Pockley. This hamlet is adorned with thatched cottages and is a sleepy oasis.

From Pockley with this more direct route in mind, I followed the various lanes to meander North towards Wether Cote farm, and then once more across country. In places the snow was quiet deep so the need for caution reduced the speed of my progress. I descended a steep hillside into Sleightholme Dale, past Sleightholme farm which looked like it had stood there for an eternity -  sadly the stable block was no longer used and was left to decay. After crossing a wooden bridge over a very full and fast flowing stream I was soon once more on Tarmac. 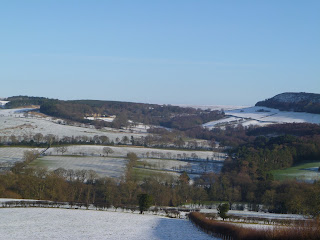 After a final short stretch on a lane I turned right to join a Bridleway, once more I looked back and around me to marvel at the rolling hills dusted with snow like icing sugar on a cake ( oooo ). It really was a beautiful day ( aaaah ). The Bridleway took me East to meet up with the road that would join the Rutland Rigg and my path across the moors. Once on the moors and with snow all around me, my pace was painfully slow. I was staying in a bed and breakfast in Church Houses that night and I had a deadline of 3pm to arrive or wait a further three hours until it opened again. This deadline meant that I could not dilly dally and rather than waste time having a well deserved lunch rest, I chose to eat on the hoof.

The path across the moors, although not suitable for vehicles, was peppered with car tracks that enabled me to move uncaring about what was under my feet or how the deep the snow was. By now I was probably the only person in that hostile environment and I did feel rather vulnerable. It was after lunchtime and the weather was starting to change, it was getting colder and the wind was building up. I added more layers to keep the chill out and the warmth in and by the time I got to the point where I would head east I was quite toasty warm.

The path down to Church Houses had not been used since snowfall so I ended up walking rather delicately over very deep drifts of snow, hoping that I would not sink up to my knees or even deeper. This is not the first time I have walked in virgin snow and the not knowing what is below your feet is always a real worry. A broken leg, so easily done is the last thing I wanted. Thankfully I descended the moors unscathed and without any dramas. All the time my thoughts were of 'I have to walk back up this in the morning and it will be hard going and very tough'. By 2.15pm I was walking into my bed and breakfast and a very welcome sit down, a warm log fire burning away, a beer and rest at last.

Posted by Happea Travellers at 07:47