Rested and raring to go!

The previous evening saw me staying at my in-laws only 30 minutes away. After a hot bath to warm my cockles, a curry and really good nights sleep I was fully recharged and almost running out of the door for the start of that day's walk. One added advantage of staying over at the same place for 2 nights was the fact that I could swap carrying everything, to managing with a day bag. It really was a nice feeling to carry only the essentials for a days walk.

I was dropped off at the start by Rachel and after a quick stop at the local supermarket for supplies for the day, I was soon heading downhill out of Blackhills, Consett. Today was going to be a long undulating day as I made my way through the Northumbrian hills.

Initially I started alongside the river and then was directed across two fields, right across the middle of them. I confirmed 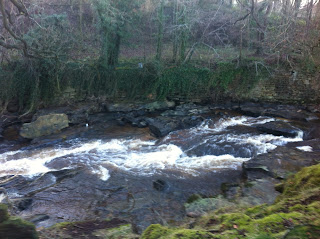 alternatives with a dog walker and elected to take the more direct route by using the edges of the fields. This initially was a sound idea but the local horsey population had had the same idea and the path was heavy going and almost as badly churned up as the field.

I was soon on terra ferma, and after passing the wonderful sounding village of Unthank I slowly climbed out of one valley into the next. I have been known to take a detour every now and then and today was no exception. I chose to do this merely to make the day more exciting and to keep myself on my toes!

My planned route was to take me along the appropriately named Coal Road through the Slaley Estate and Slaley Hall but my head was in la la land. As I walked along the road, bidding good morning to the various cyclists that whizzed past me I came across the local hunt that were in full whato and phaw phaw mode, as they sat on their steeds that were whinnying and stamping their feet. They were sprawled and spread eagled across the side of the road as if they owned the place…….well maybe they did! What I failed to notice was that they were in actual fact totally blocking the road I should have taken and I only became aware of this when my inbred sixth sense told me something was not quite right. As I checked my map, I realised far too late to turn back that I’d missed my turn. Once more I gave my self a severe and good telling off but as the road took me in the same direction I carried on, and at the last moment cut left across fields to join my intended path.

By the time I had reached the village of Slaley and mile eleven, I was ready for a break. There were no cafes to be found although there was a pub which was now owned by the community. I felt that if I went in I was in danger of not coming out. I paused for fifteen minutes and a bite to eat in the covered entrance to the local church. It was a welcome spot with a small platform to sit on and suitable shelter from the cold, biting wind.

With the impending dark night looming, I packed my bag back up, retrieved the next map and was off again. Once more my route continued along the roadside and again I had to play 'dodge the cars' as they flew past me at an alarming rate, virtually eating up the verge that I was walking on. 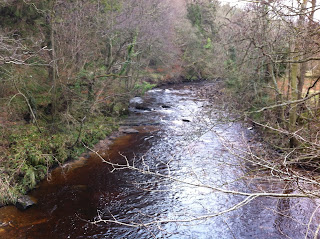 After several near death experiences I was relieved to leave the road and once again head up a hill before descending to and crossing a river. My path went right, but to the left was a large bungalow in landscaped grounds with the owner ( or one of his minions ) cutting the grass. It’s January no-one should be cutting the grass at this time of year!


I passed through the woods and the Hamlet of Ordley, back into civilisation following the Pennine Way. The final stage of the day involved a slow steady climb before reaching a point where Hexham was revealed below with the Abbey the central focus. I descended down into the town, through the pedestrian street and into the Abbey to finish the day.
Posted by Happea Travellers at 06:15